Turtles All the Way Down by John Green is such a highly anticipated novel of 2017 and it absolutely astounds with it’s incredible story. It’s so John Green-esque with the metaphors, quirky characters, and copious amounts of existential crises. I also appreciated the raw and personal approach to OCD that definitely makes this book a standout.  Turtles All The Way Down is about mental health and missing persons and sad rich boys and friendship. I couldn’t be happier with it!

The plot was really amazing! I found it on the slow side, but still thoroughly excellent. I loved that it wasn’t rife with cliches or annoying tropes, which was refreshing and just made the book more heartfelt. It was real and that makes all the difference. It’s not really a “detective” story as such, but Aza is curious about the mission millionaire because she used to know his son, Davis. She does a bit of digging…although to be honest most of her “investigative work” is on Davis. How adorable.

Aza was an amazing protagonist! She is extremely quiet. She hardly ever talks and she’s very much locked in her own head. I appreciated that spoke little and listened a lot, and the diving into her complex and messy thought process that’s coloured by her mental illness was interesting and so respectfully portrayed.  She’s obviously extremely intelligent. All John Green’s characters always are?! I love how “pretentious” they are because I was like that as a kid…hello #relatable. Let’s talk about the stars and metaphors and what poetry means and the infinite possibilities of death and life. The sheer amount of knowledge these kids spew out is just refreshing and perfect to me.

The anxiety/OCD was really brutally and honestly talked about. I do wish the term “OCD” had been used because labels aren’t things to be scared of and it would’ve honestly helped smash more stereotypes. A lot of people won’t know that Aza has OCD because it’s not on page (but John Green talks about it a lot in his vlogs and such). This isn’t the cliche portrayal of OCD either. It’s more about the anxiety of thought-spirals, the repetition to the point of endangering yourself, and the fixation on things you know aren’t a problem but you can’t stop thinking they are. You are not watching someone with OCD, you are experiencing what it’s like to have OCD while reading this book. And that’s so important.

The romance was absolutely super adorable! I loved Davis immediately. He’s rich and always thinks everyone pays attention to him solely because of his money. He’s not good at small talk either and will dive straight into complex conversation (he’s amazing) and he is the sweetest big brother. His dad is missing and so his life is tangled and sad and complicated. I loved how he and Aza slowly rekindled their childhood friendship. It’s the cutest romance, but slow and cautious and fraught with indecision and the complications of Aza’s OCD and Davis’s grief.

I loved how deep the story was too. It just wants to talk about huge matters, and some of the metaphors were extremely intense. The book feels layered and I think you could get more out of it each time you reread.

And since it is, in fact, a John Green novel…I was gut-punched with severe emotions at the end! I hated (in the best way!) and loved it simultaneously and think it was written perfectly.

I think Turtles All the Way Down is an absolutely deep and existential book that really discusses minds and who we are. It’s sad and it’s not sugar coated. There’s no messages that you need to be fixed to have a good life. Your mental illness isn’t ALL of you, but it is some of you. I really appreciated this book and its messages and its beautiful prose.

Anybody can look at you. It’s quite rare to find someone who sees the same world you do. The Unlikely Hero of Room 13B is basically described in one word: INCREDIBLE.

Just seriously, wow. This book takes a really honest and relatable look at mental illness (specifically OCD). I got totally sucked in and emotionally tangled within mere pages. It’s only 270-pages and WOAH does it pack a punch.

Basically it’s about Adam who meets Robyn at an anxiety support group and — boom — insta connection. He is dazzled by her and, sure, she’s a year older, but he can work with that. (He is 14. He is a little bit of a silly goose, but endearing.) It deals with the complications of divorced parents, mental illness, family, and first loves and, of course, growing up.

It’s written in 3rd point-of-vew, which sometimes can make a reader feel disjoined and detached? BUT NOPE. I felt entirely in Adam’s thought process. He had a bit of a “bounce” in his step, which was so refreshing to read! Particularly when you know he’s suffering from crippling anxiety. And the book really address it, too! Anxiety affects 1 in 4 people in Australia. Adam is actually trying to get better, too, so the book is uplifting in that he’s going to a support group and working towards managing. It ain’t simple though, folks. COMPLICATIONS ABOUND.

There is also an adorable relationship between Adam and his little 5-year-old half-brother, “Sweetie” (Wendell) who also shows signs of severe-anxiety/OCD. And the kid is only five. Adam is always THERE for his brother.

So let’s talk about Robyn: the love interest! Of course there’s romance, because this is YA, and there’s a good smattering of “insta-love” from page 1. Adam sees Robyn. Adam falls in love with Robyn. I was thinking, “Dude, chiiiill.” But he IS only 14 and he’s so endearing as he goes about trying to be her friend.

Also there’s a superhero vibe. YES PLEASE AND THANK YOU! I am a huge superhero fan, so I loved the little twist of all the kids in the support group taking on “superhero names”. Obviously Adam chose “Batman” to compliment Robyn’s “Robin”. (SO ADORABLE.)

OTHER THINGS TO LOVE:

Basically The Unlikely Hero of Room 13B is one you need in your life. ASAP. If you want to know what it’s like to live with anxiety (OCD in particular, but anxiety is the root of OCD) then read this book because it’s an A+ representation. 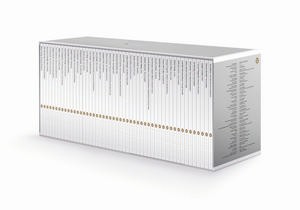 For those of us who love books, the thought, sight, or smell of them is enough to make us want to put the out-of-office on and take the rest of the day off to read. The ebook shift/revolution (I think it’s the former, but maybe one day it will be the latter) is making us rethink what books are and what form they come in. I thought it appropriate to, in this blog, feature some ‘different’ takes on books, their formats, and their uses.

For the OCD among us, this video will shock and awe. Shock, because you can understand the sentiment but can’t believe someone’s actually taken the time to do rearrange their books in such a fastidious fashion and then film it. Awe, because it’s brilliant and you are absolutely itching to do it. Oh, you’ll love how he even credits the books at the end in order of their appearance.

Stretching the concept of the book, this online picture book documents a one-year project in images. Dubbed ‘the story of one girl and her little black dress’, The Uniform Project took one dress and reinvented it 365 ways instead of buying new clothes and, in the process, raised money to send kids to school. I love that it combines the concepts of a video, a blog, and a flip book into a very watchable little film. And it makes me wish I could be as inventive and fashion-savvy!

Then there’s the ever-popular Popular Penguins, which just keep bringing us inspiration. You can download and complete a cute crossword, download complete lists of the titles and the most popular of those titles. You can also salivate over the forthcoming Mini Modern Classics. Who needs McCain? Ah, Penguin, you’ve done it again! The need to plan out, hand write, and tick off ‘to do’ lists is a pastime that I’ve furtively indulged in for as long as I have been able to write. I say furtively, because I’m only too aware of my OCD-ness and am acutely embarrassed should anyone discover the extent to which I keep lists.

I’m also only too aware that writing, checking, and then cross-referencing my lists is one giant procrastination tool. Sometimes I need to clean my room before I can concentrate on anything. Mostly it’s that I need to rewrite or mark off items from my list.

Admittedly, I’ll occasionally add items I’ve already completed just so I can cross them off. And sometimes my list contains the task of revising and updating my list, which needs to be completed and checked off as the list-making, list-checking, list-ticking cycle continues…

Of course, as the pleasure I get from creating and completing such lists is almost unequalled, I did some mental high-fives when a fabulous friend sent through a link to the brilliantly conceived, fantastically executed Listography. Judging from the positive reaction I’ve gotten from everyone I’ve now thrust these gems at as presents, I’m clearly not alone in my compulsive need to create lists.

And awesome lists they are. 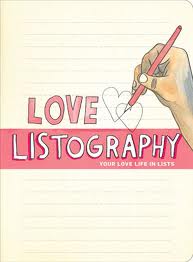 Not just traditional, bread-and-butter inventories of items to be actioned, Listography lists are, as author Lisa Nola says on her website, ‘time capsules’ that help you capture your autobiography. I tend to think they’re diary-like, but bite-sized and potentially more quirky and fun to pick up and read. Within the various Listography books, which include whimsical artwork, and which span such subjects as friends and love, you’re invited to catalogue such topics as (in no particular and non-exhaustive order):

– three people you would beat in an arm-wrestling match

– three things no one knows about you

– friends and their special talents

– friends and their best physical attributes

– who you would choose if you could be friends with anyone

– why you wouldn’t date yourself (youch)

– things you’d want written in to your wedding vows (could be funny; could be very, very bad).

Truthfully, I have so much trouble containing my ‘to do’ list habit that I don’t need any encouragement from Listography. But given that they extend my list-making habits (I am, in truth, a mostly ‘to do’ list kind of girl and these ask me to think outside traditional list-making bounds), I think I can make an exception. The question is probably more whether it’ll be safe to leave such lists lying around…