A picture book may not be every dad’s ideal Fathers’ Day gift, especially if he is really counting on more socks and jocks. But think about it, what better vehicle than a picture book to share some real short but sweet moments of physical and emotional connection between a father and his offspring.

Tossing a footy around together is cool too. Whipping up a Book Week costume is a definite contender (the male’s job in our realm). However, very little compares to a snuggly story-time session. It’s gorgeous to behold and enriching for the participants (granddaddies included). 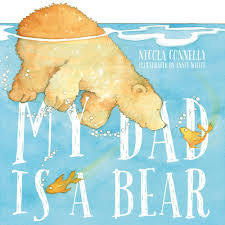 Concentrating on the littlies this time is Nicola Connelly’s and Annie White’s My Dad is a Bear. Charlie has something to share, his dad is a bear, or at least his dad displays the same traits as a bear: ‘he is tall and round like a bear’, he ‘has big paws like a bear’, and ‘he even sleeps like a bear’.

In just twenty-eight pages, Charlie manages to describe what I’d wager is the vast majority of ‘typical fathers’. However, it is not just senseless physiological satire. Connelly thoughtfully includes a few more active pursuits like fishing and climbing to enhance Charlie’s metaphoric revelations and thus broaden the typical father figure image. All are adeptly aided by the bearily beautiful illustrations of Annie White.

Like Kisses for Daddy, I love how there is not a single human in sight which makes the twist ending all the sweeter. Pre-readers will gain much through the shared interactive reading this book promotes while beginner readers should have little trouble mastering the straightforward sentence structure and similes. New Frontier Publishing August 2014

Another bear book bowling off the New Frontier shelves is Peter Carnavas’s, Oliver and George. Like his previous picture book, Jonathan!, Oliver and George will find its mark with younger readers aged 2 – 6 years. ydiving, sword-wielding young boy is ready to play. He has his playmate sights set firmly on George (represented be a glasses-toting brown bear). To Oliver’s dismay, George is too busy to play. He is engrossed in his book and no amount of cajoling or niggling by Oliver annoys him enough to turn away from it, not even a bowl of porridge tipped over his head!

Oliver is crestfallen, but like all young children bent on their egocentric missions, he quickly recovers and tries again to gain George’s attention, this time resorting to the most arresting action he can think of to thwart George’s enjoyment of his book.

Although George and Oliver’s subtly implied father and son relationship may seem obvious, Carnavas’s anthropomorphic use of a teddy bearish ‘older other’ cleverly intimates many typical child / parent situations: parent, carer, or teacher.

Oliver’s lament is familiar; his obsessive desire to be with George overrides all else, until he is finally rewarded with George’s attention then promptly forgets his former fever. This scenario of precious determination and contrariness is so typical of kids; it makes my heart dance. Carnavas never over complicates his tales, nor are they ever overtly visually overblown. Yet they deliver maximum impact with a mere sprinkling of words and a few ingenious strokes of the brush. Oliver and George is no exception.

It will be interesting watching how children react to this witty portrayal of themselves. Utterly beguiling and a subtle reminder for us bigger people to spend more ‘now’ time with our little people. Due out September 2014.

Stayed tuned for more beaut Fathers’ Day reads you can share with your child. Till then,