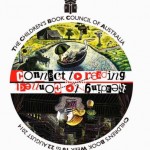 Today officially heralds the start of the Children’s Book Council of Australia (CBCA) Book Week 2014. This year’s theme: Connect to Reading – Reading to Connect can be interpreted in many ways just as ones connection with art can take place on several levels. I have long purported that the humble picture book is one of our most powerful and meaningful manifestations of art. Why? Because of its ability to entertain, educate, enlighten, and enthral at a level wordless infants and the most mature members of society are able to appreciate.

There are few finer expressions of tenderness, joy, comedy, and pain than the marriage of images and words in a picture book. They represents true art, able to transport anyone, anywhere to other times and worlds with the flick of a page. This selection of picture books aptly illustrates my point. All are artful in their own ways. You will not love them all equally, just as you will not love everything you see on the walls of an art gallery, but therein lies the enigmatic beauty of the picture book. 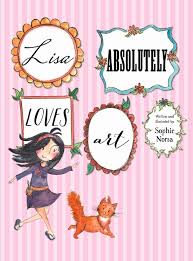 Lisa Absolutely Loves Art by Sophie Norsa is a brief visit with some of our great artists and their well-known paintings through the eyes of young Lisa as she plunges into the dreamlike world of her local art gallery after her runaway cat, Picasso. Her search for him transports her through the 1800’s, capably combining impressionism and post-impressionism art forms in an on-canvas adventure, only ending once she returns to where she began.

Norsa is a young artist herself whose reproductions and interpretations of the techniques and style used by some of our most recognisable artists are artfully rendered in this unique picture book for pre-primary art lovers and artisans alike. New Frontier Publishing July 2014 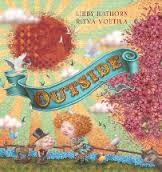 Outside by Libby Hathorn and Ritva Voutila is a glorious sensory celebration of what it is to be a child, carefree and at one with nature. The magic of being outdoors, of having grass beneath ones feet and clear bird-filled skies above is something not all young children are able to take for granted. Hawthorn’s poetic, repeating verse centres around the single question – ‘What’s that?’ between a curious young boy and his sister as they venture through their backyard on ‘a summery day’. al picture book, lulling the reader into an almost hypnotic rhythm of straightforward explanation while steering us close to the nonsensical thanks to Voutila’s surreal illustrations: the cat looks almost human, the sky is a tapestry of patterned colour, the sun blazes stylised fleurs-de-lis. I found these digital creations rich and complementary to the text however not all young children will agree. They may find the oversized heads and features of the human characters a little too bizarre to comfortably relate to. A lavish homage to the simple things in life and being young nonetheless. Little Hare Books imprint of HGE August 2014. 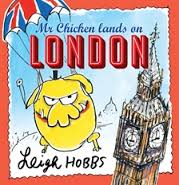 Mr Chicken lands on London. The passion one feels towards art, something that monumentally moves and inspires them can be likened to love. This love need not be confined to one line or one picture; it may encompass a whole city and culture just as it did for Leigh Hobbs and Mr Chicken.

I know many adults and youngsters alike who have nibbled their nails down to the quicks in anticipation of the return of Mr Chicken since his flamboyant debut visit to Paris. Thankfully, they do not have to wait a minute longer and neither does Mr Chicken who is returning to his favourite city in the whole wide world, London.

Hobbs, creator of Old Tom, shares his love for London with Mr Chicken in an adroitly accurate, subtly comic, whirlwind tour of some of London’s most iconic landmarks. Our canary yellow, oversized poultry protagonist cuts a striking contrast amidst the common placed drabness of the city as one by one, he ticks off his must-sees and dos. His encounter with Her Majesty is amusing to the extreme but it is Mr Chicken’s moon lit stroll over Westminster Bridge that truly rings my bells.

A pictorial postcard of London that will resonate with both past visitors and those yet to experience the city’s many allures, not to mention 4 – 7 year olds who love talking, walking drumsticks. And, like fine art, Mr Chicken lands on London is something to savour. Allen & Unwin July 2014

Connect here with the CBCA 2014 winners and more great reasons to read.