From sea to air and up into space. A substantial ship voyage. Amazing aeroplane feats. And a rousing rover exploring the red planet. Three different modes of transport literally transport us back in time with their historical significance, teaching us so much about how we got to where we are today. All inspiring, all empowering. Here are a few prodigious picture book stories steeped in history. The true story of an almost thirteen-year-old Carole Wilkinson, Ten Pound Pom tells of the auspicious journey of a young girl and her family immigrating from England to Australia in the early 1960s.

Post World War II, under The White Australia Policy, a scheme called The United Kingdom-Australia Free and Assisted Passage Agreement promised emigrating British sunshine, plentiful food, higher wages and space to live. Ex-servicemen and children could travel for free, and other adults paid only £10, dubbing these migrants as ‘Ten Pound Poms’. The inclusion of facts explaining The £10 Migration Scheme, glossary, and the ship Arcadia, in which Carole’s family travelled, gives the book a depth and validity that is so neatly etched into this fascinating and personal story. 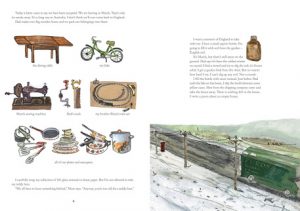 With a few packed boxes of furniture and precious belongings, and a small amount of knowledge about this foreign land, the dream of a new life for the Wilkinsons in Australia was to become a reality. A whole season and 11,397 miles sailed on the SS Arcadia later, the family had ventured into uncharted waters across the Mediterranean, through the Suez Canal, along the Red Sea, through the Indian Ocean and the roughs of the Great Australian Bight to their Adelaide destination. All the while, a young Carole learns of different cultures, experiences new sights and even makes a new friend.

Wilkinson re-lives her time on the “huge floating hotel” in her own childlike voice, and her impressions of life as a new resident in Australia clearly come from a place of fond memories. The illustrations by Liz Anelli superbly capture the elements of the era and the snippets of Carole’s diverse experiences. The pictorial features add energy and information, including maps, scenery and items of interest, breaking up the text to allow readers to absorb each part in manageable chunks.

As a part of the ‘Our Stories’ series, Ten Pound Pom is a valuable, appealing non-fiction/narrative resource for studying history and sharing migration stories. Capturing the hearts and minds of readers in middle to upper primary, and beyond, this book is perfect to pore over for the purposes of research and for pleasure. This time we travel by air as we explore the fascinating history of the development of aviation in Australia. In Amazing Australians in their Flying Machines, we are indulged with the stories of ten brave pilots beginning in 1851 through to 1935.

Ex-convict Dr William Bland patented an idea in the 1850s for an Atmotic Ship to journey from England to Australia in a mere few days, as opposed to the norm of the exhausting three month sea voyage. The balloon flight was dubbed as dangerous, and so literally never took off. 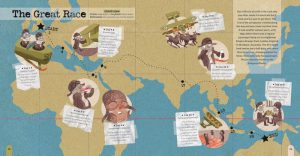 We then discover the invention of the cellular box kites that Lawrence Hargrave believed could give the stability needed for flight in 1894. Following that came the glider of George Taylor in 1909, the first heavier-than-air flying machine successfully airborne over Narrabeen Beach. The narrated and factual absorbing text and images continue to delight us with stories from the brilliant air skills of Commanding Officer of the Australian Flying Corps, Richard Williams in 1917, Ross Macpherson Smith’s winning success in the 1919 Great Race from London to Darwin, plus more inspiring heroes including Nancy Bird, the youngest woman pilot in Australia to gain her commercial pilot’s licence at the age of nineteen.

The authors, Prue and Kerry Mason, inspired to research Australian aviation history after purchasing their own vintage aeroplane, have provided a sterling non-fiction volume of interest for aeroplane enthusiasts and keen history buffs. Amazing Australians in their Flying Machines carries its weight in gold (or air) as an empowering and uplifting primary school vehicle. This is the story of Curiosity; a Mars rover sent to far-off places, and I mean far-off places, to discover whether there has been, or ever will be, life on Mars. Here is another out-worldly experience steeped in history that will not only fascinate, but enrich our imaginations and ‘curiosity’ with many unanswered mysteries of the universe.

With its illustriously large landscape orientation, varied text sizes and pictorial layouts, Curiosity certainly lives up to its space-themed nature. The spreads are generously ‘spread out’, leaving plenty of ‘space’ to digest and conceptualise the given information and images. Markus Motum’s diagrammatical, clean and aerodynamic style of graphics suitably provide the book its authenticity, effectiveness and allure.

So why the desire to explore The Red Planet? Scientists believed there was once life on Mars, but for humans to travel in a rocket would take 350,000,000 miles, and the possibility of not returning. That’s where the Mars Rover comes in. With NASA’s ongoing trials and tribulations of previous missions, a more advanced rover was designed and developed in California – the process of equipment and technology inventions are explained in the book. Curiosity, as she was named, was transported across the U.S to the Kennedy Space Centre in Florida, where she was launched into space in November 2011. 253 days later the rover carefully landed with precision. “Touchdown confirmed. We’re safe on Mars!”

With the well-considered inclusion of a timeline of Mars missions from 1964-5 to present to complete the book, the study into climate and geology and the preparation of human exploration shows there is hope still of answering those curious questions of microbial life. Motum’s celebratory book of Curiosity’s fifth year of exploration on Mars is targeted towards kids and adults alike, using a first-person voice from the rover’s perspective. The inclusion of facts is so comprehensive and never compromised, making this a valuable resource to study and treasure.