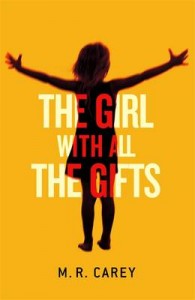 Review – The Girl With All The Gifts by M.R. Carey

What a book to kick off 2014! This book totally blew me away from the first page. It is definitely one of those books where the less you know about it the more you are going to enjoy it. So I am going to break my review into two parts: Spoiler free and Spoilerific.

What makes genre fiction so popular is the rules and lore past writers have created and passed on. Readers get to know and appreciate all the tropes, major and minor, and new writers get to play around with these rules, bending, braking, changing them as they see fit. Sometimes these changes don’t work or go too far but every now and again somebody changes a genre completely. Which is what M.R. Carey has done in The Girl With All The Gifts. He has taken a popular genre and turned it completely on it’s head. In doing so he not only breathes in fresh air but he has brought a whole new perspective to a very familiar scenario.

The book opens with 10-year-old Melanie. She is sitting in a cell waiting for the Sergeant who is going to strap her to a wheelchair and take her, under guard, to her classroom where she will learn about the world with the other children. Something has happen to the outside world and Melanie and her classmates might be humanity’s only hope.

If you loved The Passage you will love this even more, grab a copy now. If you want to know a bit more (spoiler warning) scroll a bit further down

SPOILER ALERT [you have been warned]

This a cross between The Passage, The Walking Dead and 28 Days/Weeks/Months/Years Later. Not only does M.R. Carey (Mike Carey) completely flip the zombie genre but he also brings more humanity to the genre than anyone else I can think of. Set in England, it has been 20 years since the ‘Breakdown’ which has nearly wiped humanity out (you know the drill). ‘Hungries’ roam the countryside and control the cities.

Scientists have been trying to figure out what has caused the infection, if it even is an infection, with no luck. But ten children seem to hold the answer. They aren’t like the other hungries: mindless, feeding machines. They are cognitive. However when they get the scent of food, in particular humans, their infected natures come to the surface. These children are part of a last ditch study to try and find a vaccine or even antidote.

The book is told mainly from Melanie’s perspective and she captures and breaks your heart in equal measure. The strength of Carey’s writing is in his characters and as we get to know the people around Melanie; her teacher, the Sergeant, the doctor in charge; we (and they) learn about what it truly means to be human. At the same time Carey keeps the story moving at a perfect pace. Not only are the the hordes of hungries an ever present threat but feral humans known as ‘junkers’ also put the vital research being done at risk. But the biggest threat is time itself which is running out.

The other part I really loved about the book is the science behind the hungries. Zombie stories have toyed with many different explanations, mainly virus or bacteria infection spread through blood or saliva (see biting). Nearly all zombie explanations rely to some extent on either a supernatural element or a slight (or major) suspension of scientific belief. Carey takes a different tack and uses elements already present in nature, namely fungi. The way this scientific element is woven into the story is the icing on an already incredible the cake.

Finally had time to read a book. Turned out to be just a teeny bit perfect. Sigh… pic.twitter.com/FxsAHnRpTb