Author and playwright Maura Pierlot is no stranger to success with her most recent awards boosting her literary status beyond expectations. Last year she received high accolations, being announced Winner of the Charlotte Waring Barton Award and the CBCA Aspiring Writers Mentorship Program 2017 with HarperCollins. Maura went on to complete her winning Fellowship for two weeks in March at the Katharine Susannah Prichard Writers’ Centre in WA to develop her script, Leaving into a full length play. And most recently, her debut picture book, The Trouble in Tune Town, (illustrated by Sophie Norsa) received Joint Winner for Best Children’s Illustrated E-Book in the Independent Publishers Awards (IPPY). How thrilling! So today, Maura is here to discuss her writing life and the launch of The Trouble in Tune Town.

What do you enjoy about writing for children as opposed to your young adult and playwright work?

On some level, I find it more challenging to write for children than I do for young adults or for the stage. I have a tendency to overthink things – probably all those years of philosophy training – and writing for children forces me to tell a story simply – just an idea stripped back, pure, presented in a way that engages and excites … preferably in less than 500 words. I think that’s very difficult to do well.

Your picture book, The Trouble in Tune Town, is a lively, colourful and encouraging story with some impulsive music notes and a young girl practising persistence and self-belief whilst practising her instruments. What do you hope for readers to gain from their literary experience with Meg and her musical notes? ​I hope young readers appreciate the magic and wonder of music, seeing it as a source of joy, not one of stress or obligation. I hope they accept the challenge of learning new songs in a balanced way – doing the best they can, knowing that it’s not a race, and remembering to have fun along the way. I hope they learn to dig deep and persevere because sometimes in life it’s just too easy to give up. Rather than strive for perfection, I hope kids are never afraid to try new things, or to make mistakes, and learn to pick themselves back up when things don’t go to plan. That’s where the real growth comes from.

What has the response been like so far from the audience of The Trouble in Tune Town? What kind of public appearances have you made to share your book?

​The response to the book has been overwhelmingly positive. Readers of all ages seem to identify with the story and the message, which is heartening. It’s been a big hit in families with music-playing children, also with grandmothers and aunties who seem to think it’s the perfect gift.

Until now, due to other commitments, I’ve only been able to do a few school visits. The book took a while to produce, particularly the early sketches, because we all saw the potential of the book and wanted to work hard to make sure we did it justice. Unfortunately, when the book was finally released, I had to head overseas for a family illness and, by the time I returned, it was too late to schedule a launch before the Christmas holidays. I have always had my heart set on a launch at the National Library of Australia but there was no availability for several months, hence the 6 May launch date, somewhat ironically during the Canberra International Music Festival. I’ve sold quite a few books at local markets. And two local businesses have purchased large quantities to include in gift hampers for their clients, so there’s been a nice follow-on effect from that. The book is available for sale online, but I haven’t done a lot of publicity to drive traffic to my websites. I’m a late starter to social media – I think I was Amish in another life – so I need to learn how to use those tools effectively to spread the word.

Last year you were named the winner of the CBCA Aspiring Writers Mentorship Program. Congratulations! What was your process in applying for this and how has the win affected your writing life?

​I’ve been working on my young adult novel, Freefalling, on and off for about four to five years. On the strength of an early draft, I was selected for HARDCOPY, the inaugural (fiction) professional development program run by the ACT Writers’ Centre. The next year I was shortlisted for a Varuna Publisher Introduction Program, then in late 2016 I was named Runner Up for the NSW Writers’ Centre Varuna Fellowship (both for Freefalling). I was pleased with the attention the manuscript was receiving, but slightly frustrated that I hadn’t found an agent or publisher. I did get quite a few ‘nice’ rejection letters. One agent told me she loved the story 95%, but in today’s harsh commercial climate she really had to love it 100%. Virtually all last year, I went on a hunt for the missing 5% and one day, the answer came to me so clearly that I was amazed I hadn’t stumbled upon it sooner. 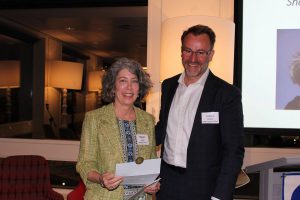 I was in the process of reworking the manuscript when applications opened for the CBCA Aspiring Writers Mentorship Program so I submitted my current version, which has subsequently undergone further revision. I was thrilled to be named the winner of the AWMP 2017. The award told me I was on the right track, and that message couldn’t have come at a better time. The mentorship involves spending time with HarperCollins staff (in editing, marketing and publishing). I’m currently talking to the publisher about how my mentorship will work, and I’m pleased that there is interest in customising an approach based on what my manuscript needs at this point in time. It’s too early to know the precise mentorship details, or the outcome, but I have no doubt that the process will be worthwhile, and that my manuscript will be much stronger as a result.

Looks promising! Congratulations again, and look forward to all the exciting news coming from your end!

To follow the blog tour and go in the draw to win a hard copy of The Trouble in Tune Town please visit here.