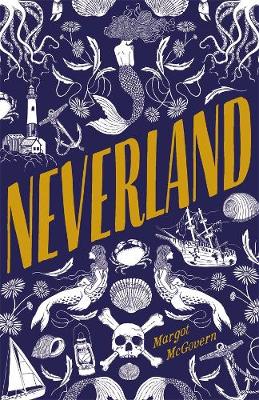 I hope it is the beginning of a trend but there are a couple of excellent Australian YA psychological thrillers around. It reminds me of former glory days when Victor Kelleher’s inimitable Del Del was published.

Margot McGovern’s Neverland (Penguin Random House Australia) is an invigorating, assured debut which blends fascinating, yet threatening, fantasy tropes; and elements from Peter Pan, into the risk-taking activities of Kit and some of her fellow ‘Lost Ones’.

Thank you for speaking with Boomerang Books Blog, Margot.

My absolute pleasure. Thank you for having me. Where are you based and what is your background?

I’m from Adelaide and recently moved back after living in Melbourne and Perth for a number of years. I always wanted to be a writer and was accepted into the BCA writing program at Flinders University after finishing school, then continued on to do a creative writing PhD. I moved to Melbourne while finishing my thesis and worked for a (now defunct) cycling magazine. After graduating, I went part-time at the magazine to try my hand at freelancing and start work on Neverland. When my husband’s job then took us to Perth, I switched to writing full-time and also joined the book blogging community (although my blog’s been a tad neglected since my daughter was born last year).

What is the significance of the title Neverland?

My protagonist, Kit, is seeking a way back to the magical childhood of her memory; however, the harder she tries to relive that time, the more distorted and nightmarish her memories become. So with the title, I wanted to evoke the sense of a dream-like place that may or may not be real and remains just beyond reach. The story pays homage to J. M. Barrie’s Peter and Wendy and I was very taken with the way Barrie describes his Never Neverland as a place we forever yearn for but can never return to: ‘On these magic shores children at play are forever beaching their coracles. We too have been there; we can still hear the sound of the surf, though we shall land no more.’ How does the cover hint at the treasures inside?

I’m still pinching myself over the cover! It was designed by Chista Moffitt and the beautiful illustrations are by Eveline Tarunadjaja. Kit’s romanticised childhood memories are based on the stories and myths her dad invented about the island where she grew up and the illustrations represent key symbols in those stories.

Why have you set the story on an island?

There were a few reasons. I wanted to reference to Barrie’s Never Neverland and to give my characters a place where they could take a time out from the wider world. But I also wanted to isolate Kit within a specific geography imprinted with layers of memory and story. And then, because the narrative is about a girl renegotiating her relationship with her past, I wanted a landscape where I could mix in some of my own nostalgia, and being a beach kid, an island seemed a fitting choice.

Could you tell us about Kit, Doc and some of your other characters?

I have a soft spot for so-called ‘unlikeable’ and unreliable narrators, and Kit reflects that; she’s prickly and self-destructive. But she’s also deeply vulnerable—a character in crisis who is trying to figure things out but making mistakes along the way.

Her uncle and guardian, Doc, is almost the opposite. However, he was forced to grow up too quickly and is consequently quite reserved. He and Kit were once very close but there’s been a lot of miscommunication between them and they’re struggling to salvage their relationship.

Doc’s looked after Kit since her parents were drowned in a sailing accident when Kit was ten. He’s also a psychiatrist and has turned their small family island into a boarding school for troubled teens. Among the students at the school are Kit’s two best friends, Alistair and Gypsy, and a new boy named Rohan who shares Kit’s desire for make-believe.

Your main characters are about to leave school. Is this the age group of your intended readers?

The story is very dark in places and and deals with suicide, self-harm, and mental illness, so I was aiming for the upper end of YA.

Neverland has some important underpinning themes and issues. Could you share any of these. The original idea for the story grew out of a sense of misplaced nostalgia. I was feeling apprehensive about the future and decided to comfort myself by rereading Peter and Wendy, which I’d loved as a kid. However, the book was much darker and more violent than I remembered and I started thinking about how, in times of uncertainty and upheaval, we often yearn for a romanticised version of the past and how this kind of nostalgia can prevent us from finding a way forwards.

I was also interested in the idea of who gets to tell a story, and what is reframed or omitted in the telling—and particularly in the fact that historically, women’s voices have often been silenced or ignored and their roles diminished. So I wanted to write a story where a young woman is forced to question the mythology of her world and her place within it.

How have you paid homage to other authors and literature in your plot, setting or characters? In the months before I started working on Neverland and while I was writing, I reread a lot of old favourites—Peter and Wendy, Treasure Island, The Odyssey, The Great Gatsby—and the story, in part, grew out that process of rereading, so it felt important to give those texts a place in the manuscript. They helped inform the story’s key themes, but also gave Kit a library to draw on as she struggles to find her voice and a way to tell her story. Then because nostalgia, and particularly a nostalgia for stories, is such an important part of the narrative, I looked for opportunities to work in little references to other favourites as well. Well, now you’ve opened a can of worms! I’ve been reading some incredible home-grown YA: Tin Heart by Shivaun Plozza, The Centre of My Everything by Allayne Webster, Untidy Towns by Kate O’Donnell and Take Three Girls by Cath Crowley, Simmone Howell and Fiona Wood. Also, The Hazel Wood by Melissa Albert from the US. And for something completely different, I’ve gone back to Daphne du Maurier (an old favourite) to read The House on the Strand and absolutely loved The Radium Girls by Kate Moore, even though I cried most of the way through. I can’t wait to get lost in your next work. What are you writing at the moment? Would you write Kit’s dad’s Kingdom by the Sea as a companion piece – perhaps with illustrations?

That’s an interesting idea (especially the illustrations part), but Kit’s world feels closed to me for the time being. That said, I loved working on the thread of magic realism in Neverland, so I’m taking that a giant leap further and currently working on a YA urban fantasy with mythological roots.

Thanks Margot, and all the best with Neverland. Your next books sounds just as fascinating.