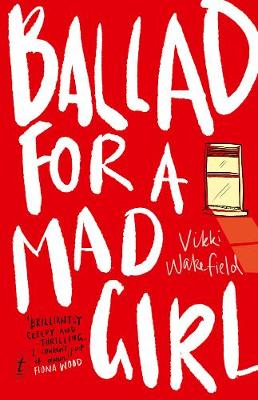 The fact that all of this year’s CBCA shortlisted Older Reader novels are written by women reflects who is currently writing Australian YA. As a consequence, many of the novels have female protagonists, including Vikki Wakefield’s Ballad for a Mad Girl. However, debut novelist Charlie Archbold (who is female) has written Mallee Boys, a novel that epitomises masculinity.

Ballad for a Mad Girl by Vikki Wakefield (Text Publishing)

Ballad for a Mad Girl has been longlisted for a Gold Inky Award—(Australian titles) and shortlisted for the Adelaide Festival Awards for Literature: Young Adult category and the NSW Premier’s Literary Awards: The Ethel Turner Prize for Young People’s Literature in 2018.

I reviewed it for the Weekend Australian.

It is Vikki Wakefield’s fourth novel, a gothic Australian thriller, a murder ballad and lament in prose. It explores the effect of grief and loss on Grace, who is trying to mask her vulnerability.

It walks a tightrope – literally and psychologically as it balances the genres of contemporary realism with elements from the supernatural ghost tale.

Grace is the “mad girl” of the title but her madness springs perhaps from her struggle with anger and grief rather than mental illness; although the barriers may be permeable.

At times the writing is crystalline to show the shattered mirror-pricks of Grace’s rage; as well as sharp images of birds: living swallows butted against tiny bird sketches. Grace’s elusive childhood “dandelion” dreams as well as echoes from a past generation are sculpted into an aching ballad of melancholy and terror. The past and present also ultimately lay the path to a “bright and unbreakable” future with some signs of hope and grace. Film An early scene where extreme prankster, Grace Foley, freezes at the pipe challenge crossing over the quarry at night is a pivotal scene in Ballad of a Mad Girl. It sets the confronting, haunting tone.

In small groups, students film a re-enactment of Noah, private school poster boy, breaking Grace’s record as he crosses the pipe over the quarry and then Grace crossing after him and freezing when she is distracted by thoughts of Hannah Holt – rumoured to have been killed by William Dean and buried in the gully below. Headlights are dimmed and stones are thrown.

Film Grace’s friends and the onlookers in their private and public-school factions.

Use different camera angles, particularly to give the illusion of the pipe over a height. NB don’t use a pipe high above the ground.

Film an establishing shot; the camera can scan characters and show close-ups of their facial expressions.

Use filters to create a night-time setting and lights to emulate the headlights. Show them dimming when Grace crosses. Include sound effects. 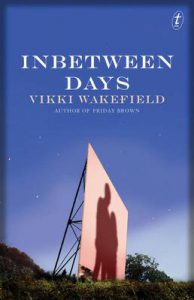 Ballad Students could write a ballad or murder ballad (lyrics that tell the story of a murder).

Read other novels by Vikki Wakefield. Not many readers seemed to be aware of this book until it was CBCA shortlisted. Feedback has since been very favourable.

It is set in the Murray Mallee area of South Australia and told by two brothers. Sandy is fifteen and a good student although dreamy. In an early scene, slapstick and terror merge when he’s almost drowned by a swollen dead cow. His older brother Red has left school and seems suited to life on the farm with his dog, Ringer. He is suffering from guilt, believing he contributed to the death of their mother.

Masculinity is explored with sensitivity and credibility, particularly relationships between father and sons. The author writes with warmth and humour and shows that rural men can be gentle and compassionate.

Mallee men/Mallee wood Mallee men are described as mallee wood. They are ‘men from any time … like stumpy mallee trees: nuggetty and resilient. A heritage of hard work’ (page 100)

Rhopalic Verse After reading about Mallee males, students write rhopalic verse to explore their characteristics of strength and endurance with mallee wood. In rhopalic verse, each word in a line has 1 more syllable than in the prior word e.g. ‘to avert dangerous situations’. The poem could be quite short, perhaps 5 lines, each with 4 words per line. (This is guide only.)

Country & City podcast Differences between life in the country and city are mentioned in the novel: e.g. in the country old and young mix. In the city ‘people stick to their age bracket’, page 119; in the country – people make inventions, page 124.

Students could use a microphone and smart phone to make a 1-episode podcast about the differences between country and city.