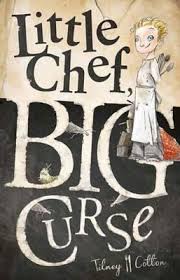 what you will, but books for 8 -13 year-olds must satisfy vital criteria. They require substance, humour be it belly-busting or cloaked as parody, and a completely honest rendering of imagination, no matter how fantastical the premise. Little Chef, BIG Curse and Two Wolves fulfil on all counts. Both are heftier reads for mid to upper primary aged kids (in excess of 200 pages). And ones I could have gleefully gobbled up again immediately I reached the end. 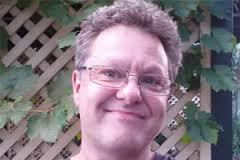 le about hapless 11 year-old, Matty Swink who dreams of being a famous chef. He is practically enslaved by the foul-tempered, mean-spirited Fenella as her live-in dishwasher. With no means, family or support, Matty’s future seems confined to sleeping under the sink in Fenella’s diner. But dreams as big as Matty’s cannot be suppressed forever and when the King of Yurp announces a grand Cook-Off and the chance to break a 500 year-old curse on his only daughter, Matty finally forges his way to fame and freedom.

This is a zinger of a tale tickling with intrigue, bubbling with soul and simmering with an underlying sinisterness that kids will find electrifying. Cotton’s brilliant mix of colourful characterisation and original one-liners like, ‘roll with pumpkins’ produces a story that is full of punch, flavour and fun. Peppered with a generous helping of comical metaphors (‘breath like dog poo’ is a favourite), sprinkled with danger and seasoned with revenge, Little Chef, BIG Curse has all the humorous and gross ingredients of a Morris Gleitzman adventure and some. Top notch nosh! That gets 10 out of 10 from me. 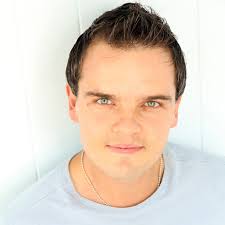 Tristan Bancks’ junior adventure books including the My Life, Nit Boy, Mac Slater Cool Hunter and the Galactic Adventures series rival those of Paul Jennings, Morris Gleitzman and Michael Gerard Bauer. Like kids 8 – 13 years-old, I can’t get enough of his quirky, comedy-loaded, layback style. Two Wolves however is a decisive departure from previous offerings aimed at the slightly older reader, demonstrating more drama, stronger conflicts and more thought-provoking themes. It blew my breath away.

Using the Cherokee Indian allegory that we all have good and bad (wolves) dwelling within us as the catalyst for conflict, Two Wolves explores moral dilemmas, innocence versus experience and family blood being thicker than water. Which wolf ultimately wins the internal battle depends on which one we feed, as thirteen year-old Ben Silver discovers.

Ben aspires to be a detective but naively lives in a world of limited resources and shaky real-life experience. He re-lives much of his life through the lens of an internal camera, ‘playing on the cinema screen at the back of his eyelids’.

This movie-making processing of events allows him to deal reflectively and safely with some pretty confronting issues, the most recent being the inexplicable, unplanned retreat into wildness with his parents.

Life on the run with them and his young sister, Olive, soon deteriorates into a painful battle of survival and family ethics. Ben is desperate to figure out what his parents are fleeing from and why but is uncertain of what to do with the truths he may uncover.

Ben’s most daunting concerns, apart from remaining alive with Olive, are the choices he is confronted with; right vs. wrong, family loyalty vs. honourable action. How Ben decides to end his movie makes for a gripping novel heaving with adventure and mystery.

Bancks’ delivery of Two Wolves is tight and crisp. Fragmented internal thought and observation are favoured over rambling descriptive narrative which keeps the reader firmly in Ben’s moments of extreme agitation. Ben is a believable hero. His naïve, almost tongue-in-cheek humour works beautifully against the darker aspects of this story resulting in a novel tweens can and will relate to even if they have never been in Ben’s situation.

Can money buy happiness? What scruples do you possess when it comes to family, or having to confess to a crime? Does deceit ever pay dividends? Two Wolves is destined to keep kids pondering over questions like these for months. Sensational stuff.

As an author, I’m extremely interested in seeing how publishers use the Internet to promote books for children (and obviously, I’m making notes on what works and what doesn’t). Lots of publishers have tried to tackle Youtube trailers, and honestly, a lot of them involve a swirling book cover and a really horrible voiceover. After watching them, I feel less inclined to hunt down the book. That said, someone recently pointed me in the direction of the new Nit Boy trailer, and it is, hands down, the best original trailer for a book I’ve ever seen. It’s fun, it’s 3D. So, I tapped Tristan Bancks on the shoulder and invited him around to talk about how the trailer was put together.

I write quite visually. I see a movie unravelling in my head as I type, so I think book trailers are an amazing way to bring that motion picture alive for the audience.

The two books in the series, Lift Off and Bug Out tell the story of blood brothers – Lewis, a kid with the worst case of nits in world history, and Ned, a nit that lives on Lewis’s head. They’re a great way to have a laugh about our favourite blood-sucking mini-beasts. And there’s a nit quiz in the back of each book.

With the trailer I wanted to build on the work I’d done creating trailers for my Mac Slater, Coolhunter series.

I showed the animator, Peter Leary, the books’ amazing illustrations by Heath McKenzie.

I then wrote a script. The animator cut the script down, did a rough animatic (still pictures with a voiceover) and he began building the 3D characters (‘wire’ frames in a computer).

I gave Peter feedback on the characters and he created a rough version of the trailer and then a final. I was amazed by how much of the animation comes together in the final render. And, when it was done, it was even better than what I’d seen in my mind’s eye as I wrote the books.

A producer has now optioned the Nit Boy books for television and my next visual-literary adventure will be a live-action trailer for the US release of the first Mac Slater book in April next year. Wish me luck!