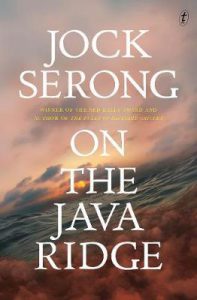 This a taut political thriller than isn’t ground down by the halls of parliament but instead plays itself out on the high seas as three people’s lives intersect as a storm bears down upon them, both literally and figuratively.

Isi Natoli is the skipper of a surf safari business that takes Australian tourists out to the reefs and islands off the Indonesian coastline. As her business partner makes a desperate trip home to Australia in search of more funds she heads out with a group looking for adventures and the perfect wave.

Roya is a young Afghani girl who along with her pregnant mother has been forced to flee her home after her father and brother disappeared. They have made their way to Indonesia and are about to embark on the next dangerous leg of their journey.

Cassius Calvert is an ex-Olympian turned Federal politician who is the Minister for Border Integrity (formerly Immigration). With an election taking place in seven days Cassius has just announced a major new policy shift in the way Australia polices its borders. A new policy which will shift responsibility away from the Government and the Navy and onto a privately contracted security firm.

These three stories are inextricably woven together with devastating consequences and in doing so creates a thriller unlike anything you have read before. What makes this book so good is that it is a political thriller that doesn’t define its politics. Cassius’s political party is never named, he could be Liberal or Labor. The attitudes of the Australian tourists who get caught up in Roya’s journey are also vague and indefinite. They all have differing views but it is their apathy more that anything that comes to the fore until they are each forced to face the reality of the situation they are confronted with and the ramifications their decisions and attitudes have.

Jock Serong’s third novel takes his writing to whole a new level moving him from the ranks of Australian crime writers to watch to writer’s you have got to read now.

Jock Serong has written a clever and unique Australian crime novel weaving together the folklore of cricket, both the backyard variety and the international, into a classic piece of noir. The novel is told from the point of view of Darren Keefe, the younger brother of former Australian Cricket captain Wally Keefe. Darren’s life is literally flashing before his eyes as he lies gagged and bound in the boot of a car on his way to what he expects is his certain execution.

Darren recounts his childhood growing up with Wally; their epic battles in the backyard and their rise through Australia’s cricket ranks. Wally is a stoic, stubborn opening batsmen who accumulates his runs without ever giving the opposition a sniff of getting him out. While Darren is the more brash, younger brother, taking risks and entertaining the crowd. These traits are reflected in each brother off the field. Wally, the more responsible and sensible, is quickly elevated to the Test team and then it’s captaincy while settling down to start a family. Darren, meanwhile,  is the larrikin everyone loves to watch and wants to know who flits from scandal to controversy on and off the field. All the while moving closer to his possibly imminent end inside the boot of a car.

This is one of the funnest crime novels I’ve read in years and is definitely the cricket/crime novel I never knew I wanted to read. This is going to be THE book for summer. Perfect for reading in front of the cricket itself.