I have been keen to read James Bradley’s Clade since hearing about it pre-publication. James Bradley has come through the ranks of exciting Australian authors-to-watch after great responses to his novels Wrack and The Resurrectionist. I adored his novella Beauty’s Sister, a memorable retelling of Rapunzel. 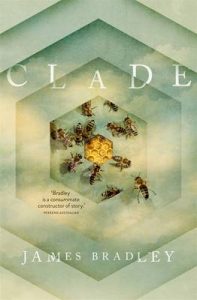 The cover with its image of bees in a surreal hexagon sets the tone for a slightly futuristic setting where bees are at risk (as they are in many places already). Climate change has caused disasters such as blizzards and flooding, leading to the disappearance of birds, crop failures, power cuts and overcrowded hospitals.

Adam and Ellie become a couple and eventually give birth to Summer. Ellie and Summer spend fractious times with Maddie, Ellie’s stepmother at Maddie’s beach house. This setting also epitomises the natural world. 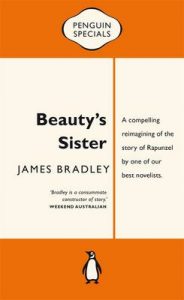 The author employs time-shifts, moving between Summer as a young girl, a teen who sneaks into houses and as a young mother of Noah who is on the autism spectrum.

A pivotal scene occurs when Adam plans to attend a conference in London but instead finds Summer and Noah, his unknown grandchild. Summer feels that she can’t deal with Noah. The three generations of family flee from the approaching storm, avoid soldiers and roadblocks, shelter in a church and an apartment and are able to escape the fate of the thousands of people killed in the flood.

Themes of aging, life cycles, death, grief and erasure of the past complement the major issue of the effects of climate change. The analogy of ‘boiling the frog’ is used to represent people’s slow response to gradual change. People don’t seem able to think clearly because they are caught up in falling from one disaster to the next.

Sci fi elements include genetically engineered trees known as ‘triffids’ that resemble baobabs.  People use ‘overlays’ to communicate as well as screens. The writing moves quickly without being superficial. It is engaging and lean yet also poetic.

Clade is an ideal Christmas gift, appealing to those who would appreciate an important story, beautifully told.

Author James Bradley is a literary critic for the Weekend Australian and blogs at City of Tongues.