Being a book lover, I had been really looking forward to reading It’s A Book and I wasn’t disappointed. Print versus digital is the topic of the moment, and It’s A Book handles this contentious issue in a clever and humorous way.

One of my other favourite topics is cats and from the moment the eyes peered out at me from the cover of There are no cats in this book, I was hooked.

There are no cats in this book was a picture book I knew nothing about but it’s another delightful story for young readers.

Written and illustrated by Lane Smith

In It’s A Book, we meet a monkey with a book and an inquisitive Jackass with an electronic device. The Jackass is mystified by the monkey’s book and asks what it is.

“Can it text?” Jackass queries.

By the end, the Jackass learns the joys of the printed page (although he still can’t quite grasp how the book “works”).

I loved the text and illustrations in this book but to me it was the subtleties that set it apart. Watching the donkey trying to ‘charge’ the book was very humorous. Lane Smith uses a double page illustration with clocks on the wall and no text to show that the jackass is completely hooked on the book.

Of course it’s how we’d like to see children respond to a book so as well as providing great humour for kids, it also provides satisfaction for adult readers.

THERE ARE NO CATS IN THIS BOOK

There are no cats in this book has easy to read text, engaging characters and an interactive and innovative design. And of course, when you open the page, what do you see? A family of cats. So there ARE cats in this book.

I’m not going to tell you why the title is so appropriate, you’ll have to read the book for yourself.

But what I can tell you is that kids will love the humour in it, the simple colour illustrations and the telling detail like the 3D postcard in the book that makes the reader feel as if the characters are really talking to them.

Published by Walker Books, It’s a Book and There are no cats in this book had a completely different but engaging perspective on books. They are picture books to be enjoyed by a variety of ages and my 11 year-old giggled his way through both of them. 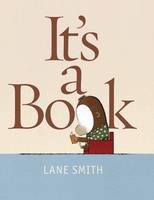 For all the debates about the future of the book, which are getting both tedious and, well, whiny, there’s a refreshing new take on the matter. It’s a book called, er, It’s a Book.

Crafted by Lane Smith, it’s a simple but wry reminder of how books are good, standalone objects that don’t need to be fancy in order to engage us—the joy of reading is entertainment and pleasure enough. And what better way to convey it than with a YouTube video replete with a cartoon donkey and monkey?

The video opens with the donkey (with oh-so-cute, metronome-like vacillating ears) asking, ‘What do you have there?’

The monkey responds, ‘It’s a book.’

The donkey asks, ‘Can you scroll down?’

The monkey answers, ‘No, you turn the page. It’s a book.’

Donkey: ‘Can it tweet?’ (This also happens to be my favourite moment, with the donkey making a too-cute hand/hoof gesture when asking.)

The video has gone viral and, by all reports, the book has become a bestseller too. And no wonder. It’s a simple idea executed well, and perhaps conveys what most of us booklovers have struggled to convey all along: technology is great and has its place, but a good book is a good book and doesn’t need bells and whistles to shine.

That said, there’s no irony that It’s a Book uses web technologies such as YouTube to promote and sell the book. And successfully so. It’s also perhaps a sign of the future, with complementary tools such as blogs and quirky short videos with cartoon monkeys and donkeys (and penguins—the perennially popular penguins are sure to make an appearance) to promote them, potentially even drawing in a traditionally non-reading audience.

In many ways, this video reminds me of the Beached Whale series that went viral, although I’m not certain that there was a book attached to that, or that if there was, it came afterwards. Either way, ‘I’m beached as, bro’ has entered the collective consciousness and I can’t help but think the phrase ‘It’s a book’ will too—a shorthand for the fact that it doesn’t have to be anything more than it is. It’s a book. And that is more than enough.

I challenge you to watch this book trailer for Lane Smith’s latest and not find yourself smiling ear to ear. The music’s kind of addictive too.