No, you won’t find cute, fluffy chicks or even prettily decorated eggs in these books, but you will find rabbits and some very funny antics! Rather than teaching Easter traditions, we’re going for more of an entertainment-inspired approach to play with your kids over the break. From a pencil playing hide-and-seek to a can-you-guess game of heads and tails, and a hilarious round of Chinese Whispers / Secret Message, these picture books will keep your little ones guessing til the very end. If you want to see a bunny ‘crack it’ at Easter time then look no further than Rodney Loses It! With Michael Gerard Bauer’s rhyming narrative that enthrals, enlightens and ensnares the emotions, plus Chrissie Krebs’ boisterous cartoons, it’s no wonder this book has made the 2018 CBCA Book of the Year Shortlist for its winning qualities.

A lesson in how NOT to panic, how NOT to dramatically overreact, and certainly how NOT to lose your cool when you’ve lost something precious. This book is a prime example for children around the 4 to 6 year old mark that tantrums, tears and thumping of feet don’t always solve the problem. Rodney and his exacerbated exasperation doesn’t fail to excite and the longer he searches for his beloved pencil the more it makes us laugh. Especially because we know where it is all along!

Colourfully entertaining, full of action, frustration and utter delight, Rodney Loses It! will have its readers begging to relive this bunny’s meltdown time and time again. 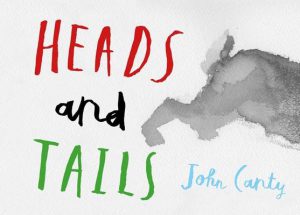 Starting off the hunt is the furry-eared, fluffy-tailed rabbit, on a mission to uncover the truth behind its missing other half on the following page. Heads and Tails by John Canty is a beautifully illustrated, interactive game of prior knowledge, prediction and classification that will have its young readers engaged from head to tail!

Each page delivers three colour-coded clues about a certain creature’s characteristics, accompanied by a watercoloured painting of its behind. “I have long furry ears and a small nose. I live in a burrow in the ground. I have a white fluffy tail. I am a…” Then cleverly, upon turning the page, the answer is revealed in bold black text with a more detailed, textured watercolour and black print image showing the front part of its body. Featuring a menagerie of animals, including a tiger, fish, rhinoceros, turtle, crocodile, plus more, the book continues with its repetitive, clues-and-answer format. Not to say there isn’t a little trick or two in there to keep readers on their sharp-witted toes!

Educationally fun, lively to read aloud and play, with a variety of vocabulary and animals to learn, young children will adore Heads and Tails for its spunkiness and rhythm. Everyone knows that the game Chinese Whispers or Secret Message (Broken Telephone?) usually ends up in a linguistic mess! And this one involves a highly important message about what to bring to a friend’s surprise birthday party. In What the Fluffy Bunny said to the Growly Bear, what DID the fluffy bunny actually say to the growly bear? P. Crumble and Chris Saunders send us along this whacky line of mixed-up messages that keeps us gasping for breath, and squirming with unease at the confusing, amusing calamity that unfolds.

Immediately we are drawn in with Fluffy Bunny’s valiant call for Growly Bear’s attention, and the digitally masterful prominence of the illustrations. But as soon as the characters speak the tone becomes light, and the pictures, airy and sweet, sealing the story’s playful mood and innocence. The bunny’s original instructions were to wear a hat and bring a cake for Zebra’s party. As each animal passes this on, the message becomes more and more woolly with other similar sounding words for ‘hat’ and ‘cake’, such as ‘cat’ and ‘steak’, ‘mat’ and ‘plate’, ‘acrobat’ and ‘snake’, and so on. And when the animals finally come together to deliver their surprise to Zebra, he is not the only one who is surprised…and totally confused!

The illustrations stand out with big, burly characters, just like Growly Bear, accenting a gorgeous backing softness, just like Fluffy Bunny. What the Fluffy Bunny said to the Growly Bear is a gigglicious combination of fun, rhyme, language, short-term memory awareness… and chaos, that will be ‘well-received’ by preschool-aged children these holidays.