With Donna Tartt’s highly anticipated The Goldfinch due for release on October 23  (don’t miss out on our special pre-order offer) and remembering how brilliant Donna Tartt is I decided it was time to re-read The Secret History. I don’t normally have time to reread books because there are just so many books, new and old, that I haven’t read but Donna Tartt is so amazing I wanted to revisit her.

The first time I read The Secret History I can distinctly remember being blown away. Just like the book’s 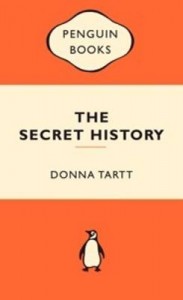 main character Richard I was sucked into the world of Hampden College and the tight-knit group studying Ancient Greek. Having originally read the book 10-11 years ago my memory was very fuzzy and I remember the book being about Richard falling in with this elite group who thought themselves above everybody else, so much so, that they believed they could get away with murder. But they couldn’t get away from the guilt and the secrets after the fact.

Reading it the second time (and being 10+ years older) changed the whole perspective of the book for me. I was around the same age as Richard the first time around so I guess I was susceptible to the charms of both the college and its inhabitants. Second time around I was much more aware of the subtle manipulation of Richard. This was probably in part to having already read the book but also part being older (and hopefully a little wiser). Instead of being charmed, like Richard,  by Henry, Francis and the twins I found them completely pretentious and detached from the real world. Their money, their attitude, their cleverness hid their naivety and I think on my first reading I (again like Richard) was the more naive one.

What I found really interesting was I pretty much remembered most of the book up to Bunny’s murder but not a thing afterwards. The whole unwinding of each member of the group and the group itself felt completely new to me. I knew it happened but Bunny’s funeral and the eventual ending had completely escaped me. The first time I read the book I felt the murder changed everyone involved. The weight of guilt and having to keep a secret ate away at everyone until everything disintegrated. This time I don’t think the murder changed anyone, with maybe the exception of Richard. I think the murder just highlighted who each character really was and they eventually turned on one another as they had turned on Bunny.

Despite reading The Secret History with this new perspective (or more likely because of it) I thoroughly enjoyed the book second time around. Donna Tartt is an immense talent and is well worth reading again and again.