By now, the last of those cleverly crafted Book Week costumes are washed and tucked away. Authors and illustrators all over Australia are reaching for mugs of hot lemon and honey tea to soothe raw throats, and children are undoubtedly curling up with pen and paper or else reading a brand new story, inspired by their last week of close encounters of a literary kind. It’s why we as (children’s) authors write, to be read and to in doing so open vistas, create possibilities and share adventures.

Fantasy, sci-fi, steampunk author, Sean McMullen subscribes to this notion with the same fervor he injects into his trillions of fantastical tales. Together with well-known fantasy author, Paul Collins, he has penned yet another epic fantasy series, The Warlock’s Child. I have yet to complete the adventure with Dantar and Velza but if the hackle-raising cover by Marc McBride (he is the illustrator of the Deltora Quest series) is anything to go by, then I cannot wait to jump on that ship with them!

Sean was kind enough to share his thoughts on how reading fantasy can seriously hone a child’s reading skills. 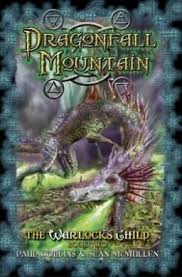 most powerful tool that can be used to boost literacy in kids? In my opinion, it is persuading them to read voluntarily, and fantasy has a lot going for it when it comes to alluring, rather than forcing, students to open books.

While studying medieval literature for my PhD I discovered the origins of fantasy’s powerful combination of adventure, action and excitement, romance and magic. Around 1140 the old-style chanson de geste was being shouldered aside by the newly invented roman courtoise. The chansons were dominated by men fighting, but the romans had a good balance between male and female characters, and included romance. There were still quests and battles to maintain the excitement, but warriors generally did their great deeds for their ladies, rather than some boring king.

What worked for medieval readers still applies today’s schools, but accessibility is now the issue. When Paul Collins and I were planning The Warlock’s Child series we were careful to keep it reader friendly. Instead of hundred thousand-word doorstopper, the story is spread over six less daunting books. The first five end on cliff-hangers, encouraging kids to keep reading. The perspective is shared between two teens, Dantar and his sister Velza, avoiding gender bias.

Book One, The Burning Sea, opens with a dragon attacking a ship, and in the first five thousand words we also witness a court martial for cowardice, learn that there are spies on the ship, and discover the importance of fire prevention at sea – the hard way. In short, it’s fast and exci Thus readers are encouraged to begin the series and to keep reading, yet it is fantasy, which is often criticized for being escapist. Is this bad? When asked this question on a teen literacy panel my daughter – then twelve – replied, “If the real world follows you into all your reading, then you might as well not bother reading.” Fantasy can provide much needed respite from the real world, and when kids return to this world their reading skills are always sharper.

The Warlock’s Child is out now with new titles being released throughout 2015 by Ford Street Publishing imprint Hybrid Publishers.