A year ago, I made a rare flight to Rockhampton. It was a mid-week, evening departure on one of those regional planes no bigger than a Lego model. What struck me most about the flight however as I waited in the boarding lounge, was the sheer number of men and women arriving into Brisbane that night from various regional centres, all still attired in their high-vis work shirts and dusty boots and smelling ‘like diesel and machines’ – the FIFO workforce. 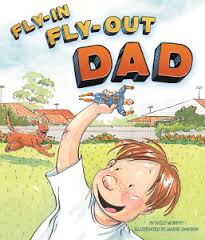 Fly-In Fly-Out Dad is a picture book by Sally Murphy and Janine Dawson that addresses this regular migration of parents (and non-parents) to occupations in remote centres, often for weeks at a time. What is the norm for an increasing number of families is unknown by many children and seldom seen in books. Representations like this picture book and Jo Emery’s My Dad is a FIFO Dad and My FIFO Daddy by Aimee O’Brien, both published late last year, are therefore gold when it comes to surviving this somewhat specialised way of family life.

The FIFO/DIDO employment system exists because the benefits of assisted commuting of employees to mining destinations for example outweighs the costs of relocating families and establishing new communities at the site of employment. This has many benefits for the families involved but several drawbacks too namely the anxieties it can generate within the younger members of a family, most notably, according to studies, in boys.

In Fly-In Fly-Out Dad, our little boy hero loves his dad and seems to accept the idiosyncrasies associated with his job, his funny smells and long absences. Nevertheless, he lives in eternal hope that maybe, one day, Dad will stay and not leave them for weeks on end.

The boy’s family life is a stable, comfortable haven for him, mum, and his baby sister. Having dad at home cements this feeling of security. With Dad around, completeness buoys the boy but also reinforces his desire to have dad around permanently. It’s a simmering anxiety that never fully dissipates.

Through his father’s animated anecdotes and descriptions of life working the mines, he assumes super human qualities in the eyes of his son, which in turn allows the boy to gain a clearer picture of his father. In return, the boy shares ‘all the living’ he has done since he last saw his father.

Anyone who has had a loved one work away for extended periods, be their relationship one of parent and child or as a couple will immediately appreciate how intense this period of initial reunion can be. There is so much want and need to share, to compensate for lost time together that the exchanges don’t always go smoothly. 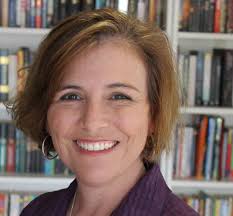 Thankfully, our little lad’s dad relishes his time at home, dividing it generously between fatherly obligations, his pregnant wife, and adventures with his eldest son. No moment is wasted.

Murphy’s award winning way with words ensures this narrative is relevant and light-hearted yet intrinsically sensitive to the FIFO dynamic. The measured repetition of certain key phrases adds weight and emotion whilst also providing clear expectations within a cyclical time frame. The boy is still deeply dismayed that his father has to leave again but bravely shows stoicism in front of his parents. Dad reminds him to embark on more adventures while he’s away so that his departure ends on a note that rings loudly of resilience and acceptance. 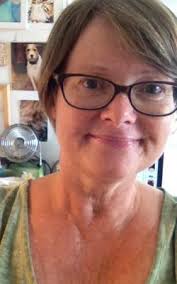 Dawson’s water coloured depicted family possess a real sense of charm and individuality. I love her portrayal of Super-Dad both in his home environment and in the dongas surrounded by burly workers dining on dainty chocolate brownies and vanilla slices. (The canteen scene is a standout favourite). This clever use of visual comedy illustrates the gender diversity of these careers as well.

More than just a staid explanation of what a work away parent does, Fly-In Fly-Out Dad is a beautiful picture book celebrating the super-hero in every father and an entertaining assurance that the temporary absence of a parent need not make a family any less loving or united.

A brilliant kindergarten to early primary classroom catalyst for discussion about this very real family dynamic.