Stand in the kids’ section of any library and you’ll soon discover what under 10 year old readers gravitate towards; pacey, riveting chapter books, starring jump-off-the-page characters with the odd quirky picture thrown in to keep it all real. 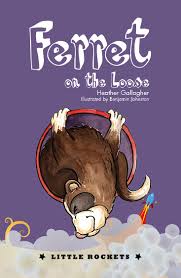 This is precisely what New Frontier Publishing is delivering with their dynamite Little Rocket Series. Like Aussie Mates and the (now ceased) Aussie Nibbles collections, Little Rockets junior fiction is aimed at that Golden Age of reading where kids are still willing and able to suspend belief for action and fun and downright silliness. This series certainly ticks all those boxes. The books have a generous physical feel and look about them which will stand up to many years of being loved. Ferret on the Loose is the latest to hit the shelves.

Take a club-full of feisty ferrets and over-anxious owners, a determined founding father, Mr Olfart, (yes you read correctly) and a best friend who doesn’t mind rodents in the slightest and you’ve got one crazy recipe for fun.

Ten year old Lucy and her pet ferret Flash are seasoned competitors in the annual Fastest Fearless Ferret Race. Only trouble is, Flash doesn’t always quite live up to his name. Not that he isn’t fast, he is. But he is unpredictable and given to distraction. No amount of coaxing and cajoling with chocolate can entice him down that clear plastic racing tube to fame and fortune, and the gold trophy that Lucy longs to see her name engraved on sooner than later.

Tragically, Flash’s training goes from bad to worse when he is confined to barracks after nearly concussing himself and then mysteriously disappearing. Lucy is distraught. Her ferret-racing nemesis, Elisha Muggins, is conspicuously smug. And come the day of the big race, Flash is still missing. It is not until the winners are announced that Lucy realises the winner is in fact, her Flash, in disguise!

You’ll have to read this zippy little tale yourself to find out who the real ferret-napping culprit is. Benjamin Johnston’s animated coloured illustrations and Heather Gallagher’s comic use of names and situations will keep you and readers aged 7 and beyond amused along the way.

Things I learnt from Ferret on the Loose: Wanting to win above all else is not wise. And letting a ferret loose on a moving tread-mill is even less wise.