Kids aren’t always especially nice to each other. From the most tender of ages they are on the lookout for ways to demoralise, break-down and lord it over each other. It’s all part of your basic survival of the fittest mentality and the procurement of stupid nicknames is one small but powerful weapon in this on-going battle for supremacy.

Now, I’m of Asian descent with a skin type that deepens to ‘kalamata olive’ with repetitive sun exposure. My name is Dimity, habitually shortened to Dim. Put all three together as some enterprising class mates of mine did and you’ve got yourself a ‘burnt Dim Sim’. That little gem must have completely depleted their collective mental arsenal. Michael Gerard Bauer’s comic romp, Eric Vale Epic Fail, illustrates one kid’s classic demise, the misappropriation of a really stupid (but undeniably funny) nickname and his subsequent attempts to rid himself of it. This book did unintentionally throw me back amongst the dim sims but in a sinfully hilarious way.

Eric Vale is your normal Year Five kid who in spite of drifting off in class whenever his ‘brain goes on a hike’ which is quite a bit, manages to distil most of his creativity and genius into his action adventure stories.

He has an overactive imagination, a best mate whose idea of a bad day simply doesn’t exist, and a nemesis in the shape of one Martin Fassenbender; perfect components for a knock-me-down, tie-me-up and rescue-me-before-the-train-hits adventure. The kind of adventure in fact, that Secret Agent Derek ‘Danger’ Dale encounters on an hourly basis. 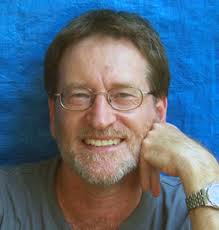 Bauer deftly manoeuvres Eric through a series of epic fails with hilarious alacrity and style. Unlike the poetically funny tomato sauce incident, readers are not slathered with a thick morass of morals. Ethnicity, individualism, fitting in and good old fashioned mateship are all treated with a robust finesse but told with that in-your-face jocularity that midgrade readers find so addictive.

I really feel for Eric Fail – er Vale. Who wouldn’t? He’s the dreamer, the schemer and ultimately tenacious enough to score on many levels. And he represents at least fifty per cent of kids in the school yard with ludericous labels, like Dim Sim. But I love his best mate Chewy more. You could practically drown in Chewy’s irrepressible buoyancy. His glass is never just half full, it’s overflowing. 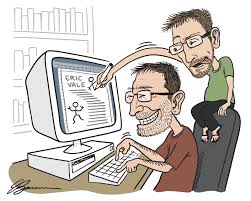 It took me a few pages to adjust to the relaxed layout and jaunty comic book style of Eric Vale Epic Fail, but Joe Bauer’s zany illustrations eased my transition into the graphic style chapter book (Grapter if you like) superbly. Outrageously daring and 100% reflective of his father’s humour, Joe’s talent is as delightfully deadly as a Big Bob head squeeze.

‘If you think you can, you WILL’ enjoy this epic read. Any 10 year olds undoubtedly will. And the best bit: Eric Vale lives on in two more books in this series, Eric Vale Super Male released April 2013 and Eric Vale Off the Rails released August 2013. And if that wasn’t enough, stay tuned for the spin off series featuring your favourite secret agent Derek ‘Danger’ Dale. Destined to be another epic win.

Stock up for Christmas with all of Michael Gerard Bauer’s books here.