END_OF_DOCUMENT_TOKEN_TO_BE_REPLACED

Elizabeth Kasmer’s debut novel Becoming Aurora has just been published by University of Queensland Press. It has a thoughtful, multifaceted storyline and deals with important issues. Thanks for speaking with Boomerang Books Elizabeth.

I live in a tiny town in the hinterland of the Sunshine Coast. Over the years I’ve met many aspiring and established writers through the annual CYA Conference in Brisbane, SCBWI (Brisbane and the Sunny Coast) and the occasional visit to the Write Links group. Children and YA writers sure are a warm-hearted and generous lot!

My work background is quite varied. I’ve worked for the blood bank as a donor attendant (visiting just about every RSL and local hall in the greater Brisbane area), as a car park attendant and receptionist. When I was a student I worked in a recycling factory and I have also worked as a primary school teacher. Since the birth of my three sons I’ve helped my husband run his home-based business as a construction programmer. Any spare time is usually spent reading, swimming or catching up with family and friends.

What award has Becoming Aurora won?

Becoming Aurora (or, Aurora, as it was then known) was awarded the Queensland Literary Awards, Emerging Queensland Writer – Manuscript Award 2015. Could you tell us something about your main characters, and the genesis of Aurora’s name?

Rory is grieving the loss of her father and trying to fit in with a group of kids who resent the influx of migrants (known as ‘boaties’) into their town. Jack is a feisty former champion boxer and tent boxer and Essam is an Iranian migrant and boxer trying his best to fit into his new home country.

I named Aurora after a painting that hangs in the Queensland Art Gallery. I was in Brisbane for a meeting with my writing mentor to discuss story ideas when I decided to take the opportunity to stop by the gallery. Inside, I got talking to an elderly man who told me he had been visiting the (Australian) paintings every year since the gallery had opened there in 1982. He said his annual trip was like visiting old friends. I was on my way out of the gallery when I spotted Aurora by Edward Burne-Jones (one of my ‘old friends’).

As I have a niece named Aurora I decided to purchase a postcard of the painting to send to her. On the train trip home I knew the main character in my story was named Aurora by her father after the painting hanging in the gallery.

How do your characters show kindness?

Rory tends to Jack in the aged care facility and takes the time to listen to his stories. Through friendships with both Jack and Essam, Rory learns to overcome her prejudices and preconceived ideas of what ‘old person’ and ‘boat person’ means. Essam teaches Rory how to box.

How is Becoming Aurora a very Queensland story?

The story is set in the (former) sugarcane town of Nambour. I tried to root the story in the landscape, using local features and icons such as the Glass House Mountains, the beaches and the Big Pineapple. The story is also set over the Christmas holidays which means there is plenty of heat, sweat and storms brewing on the horizon.

Have you received any responses from young readers about Becoming Aurora that particularly resonate with you?

Not as yet but I’m looking forward to hearing responses from young readers!

A children’s novel also set in Queensland. This story revolves around a river, superstitious river folk, and two friends who live and fish there. 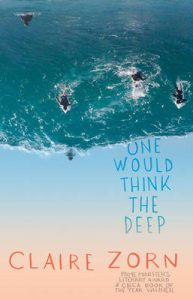 I’ve loved so many books this year but off the top of my head, Rebecca Lim’s The Astrologer’s Daughter, Claire Zorn’s One Would Think the Deep and Lian Hearn’s Tales of the Otori are standout reads. I’ve also just finished (and loved) Vigil by Angela Slatter where the world of the Weyrd collides with modern-day Brisbane.

It was great meeting you at the Brisbane Writers Festival and being in conversation on a panel of debut YA novelists with you, Christopher Currie and Mark Smith. What’s a strong memory of that day?

Meeting both yourself and fellow debut writers Chris Currie and Mark Smith for our discussion was a highlight, but my strongest memory of the day was when I went back to the green room to collect my bag before heading home. I slid open the door and inside, waiting to go on stage, was David Levithan, Meg Rosoff and Jay Kristoff! I stumbled into the room, smiling like a maniac and babbling about just needing to get my bag. David Levithan asked me a question, but it was at that point I got tunnel vision, grabbed my bag and backed out of the room, still smiling. I’m kicking myself now because, really, who wouldn’t want to say hi to a trio of awesome authors?

What a memorable green room encounter!

It was lovely to meet you and all the best with your books, Elizabeth.