Great Aunt Lola is about to die. At least ten year-old Stephen thinks she could because she’s that old, and grumpy. And Stephen, labouring under a self and parent imposed ‘shy label’, is more than a little scared of her. He simply wants to flee, but is stuck in Aunt Lola’s house for the next three weeks until she turns eighty, or dies. 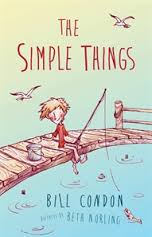 They say the simple things in life are the best, but could friendship with his elderly aunt be that easy and straightforward? Award-winning author Bill Condon convinces me it can.

Condon’s latest ‘tween’ novel, The Simple Things is for bridging the generation gap, what styling gel is for rampant adolescent hair-dos; maybe not 100% essential but essentially 100% worth the effort.

Actually, it was no effort at all to immerse myself into this heart-warming tale about letting go, facing personal doubts and overcoming uncomfortable situations. It’s a story about an only child who does what his parents tell him to do, is scared of climbing trees and doesn’t seem surrounded by an ocean of friends.

Blue, Stephen’s dog back home, is the one he misses most during his enforced exile at Aunt Lola’s place. However, he soon meets Lola’s neighbour and past flame, Norm, and Norm’s granddaughter, Allie. With their help, Stephen is able to confront a few of his short comings. He also embarks on a small sojourn of self-discovery as he learns about the simple things in life – like fishing, cricket, climbing trees and death. All this explicably pulls him closer to Aunt Lola. They form a prickly alliance, each benefitting from the other until finally they are forced to admit a deep and special friendship.

The Simple Things is ‘smiley face perfect’ (re; the wet cement moment page 127). Condon writes with unaffected adroitness, delivering this story with equal measures of gentle humour and poignancy, and just enough secrecy to entice readers to want to find out what really lurks behind Aunt Lola’s tough-guy bravado. 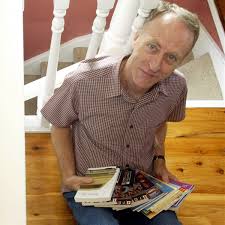 Condon’s characters are bright, sharply drawn individuals with enough depth to make us laugh and cry, minus the melancholy. I found Stephen’s charismatic, larrikin father and sarcasm-welding Allie most endearing along with our hesitant hero’s comical boyish charm.

The Simple Things is one of those easy to read, easy to enjoy books, so I suspect it was not that simple to write. But I for one am grateful Condon persevered as Stephen did with his aunt, for it simplifies the complexities of a young person’s relationship with themselves and their aging relative with composite grace and humour, allowing young male and female readers to value and cherish their own relatives all the better.