The Lucky Country. That’s Australia. We embrace difference. Celebrate diversity. Stand up for what we believe in. Be ourselves. Show compassion for those in need.

The following picture books, as chosen for the 2014 Speech Pathology Australia Books of the Year shortlist, all share common themes; diversity, friendship and uniqueness. The Short Giraffe by Neil Flory, illustrations by Mark Cleary, is a fun, humorous story that highlights the importance of inclusion, especially when one feels like an outcast. Boba the baboon is photographing the tallest animals in the world; the giraffes. But there is a tiny problem, Geri the giraffe is the shortest giraffe ever and is not visible in the camera shot. Instead of excluding Geri, the compassionate, accepting giraffes attempt various creative ways to bring him up to their height, all however leading to disastrous, yet comical circumstances. Finally, it is a tiny caterpillar that points out the most obvious solution; to bend down to Geri’s level, and they capture the perfect photo. Now, here’s a character who is not embarrassed to be different; it’s Bea, written and illustrated by Christine Sharp. This whimsical story explores diversity of the mind, rather than physical appearance. Whilst the other birds peck at the ground, flock together, build nests, chirrup and hippity hop, Bea is most unusually baking biscuits, disco dancing, travelling the world in a hot air balloon, and bussing through the country. It is until Bea meets her friend, Bernie, then we realise that having ‘unusual’ tastes are not so unusual when they are enjoyed and shared with others. ”A joyful story about being true to yourself and daring to be different.” 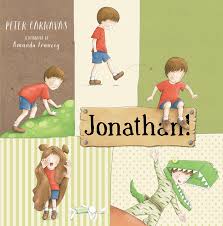 Speaking of being ‘daring’, it’s Jonathan!, written by Peter Carnavas and illustrated by Amanda Francey. Engaging rhythm and action in the text, and pictures to reflect the same. Jonathan! is a cute story of a boy who certainly isn’t ‘afraid’ to be his cheeky self, but in a way that he has fun changing his persona with different costumes. As he consistently attempts to scare his family members with frightening voices and ingenious outfits, his efforts prove superfluous. Jonathan unexpectedly meets and befriends a large, teeth-gnashing dinosaur who helps him triumph with his pursuit. That is, until, in a twist of fate, we are surprised by both the dinosaur’s identity and Jonathan’s reaction. In Starting School by Jane Godwin and illustrations by Anna Walker, we meet more excited children who are keen to have fun and discover new things. Tim, Hannah, Sunita, Joe and Polly are starting their first day of school. In a gentle, informative story we learn about each child and their perspectives on the routines and events that occur as they embark on a huge adventure that is primary school. Throughout the day we observe them organise their belongings, familiarising themselves with their classmates, forming bonds, exploring the school grounds, establishing rules and routines, learning new subjects, and reflecting on the busy day. Godwin makes learning fun with some funny mishaps like spilling juice, fiddling with a girl’s hair and losing a pencil case. Whilst Walker so beautifully ties in all the minute details with her watercolour and collage characters, school related belongings, food, furniture, real life pieces of work, toys and buildings. Starting School is a perfect representation of the importance of accepting others, getting along, individuality, responsibility and resilience. Another tale of best friends is Margaret Wild‘s Davy & the Duckling, with beautiful illustrations by Julie Vivas. When Davy meets the duckling, they look deep into each other’s eyes. Already smitten, the duckling follows Davy around the farmyard and all the way back home. Davy shows true adoration and cares for the duckling like a baby. We watch as they both grow, and we see not only companionship, but empathy, support, pride and encouragement as Davy achieves special milestones. In a touching moment, an old, achy duck seems to regain some youth when it hears that Davy is to become a father. And it is so sweet to observe a role reversal to complete the story, as the duck now leads baby Molly around the farmyard and all the way back home.