When reading a book by Julie Hunt I feel like I’m entering into an uncanny world, where imagination seeps into the interstices of reality. Julie is the author of The Coat (illustrated by Ron Brooks), which won CBCA picture book of the year in 2013.

Her other major books are Precious Little (illustrated by Gaye Chapman), the Little Else series (illustrated by Beth Norling) and KidGlovz, which features in this interview. These books are published by Allen & Unwin. Quality graphic novels for children are extremely rare and should be cherished. KidGlovz, written by Julie Hunt and illustrated by Dale Newman over four years, is an outstanding example of the form. It won the 2016 Queensland Literary Award and Dale was shortlisted for the 2016 Crichton Award as a debut book illustrator. Although sophisticated, reluctant readers also enjoy it.

The title of KidGlovz derives from the saying, ‘handle with kid gloves’. The protagonist, KidGlovz is a talented, fragile boy who is being raised for profit rather than nurtured. With insufficient food and while virtually a prisoner in his room, he is visited by tightrope walker, Shoestring, who frees him from avaricious guardian Dr Spin, exposing him instead to an external world of danger and adventure. I met Julie at the State Theatre Café in Hobart last week. It seemed like a fitting, although subconscious, choice by Julie because KidGlovz begins as a theatre performance by the young precocious pianist. Fittingly, the Hobart theatre and café also adjoins a bookshop.

This was the perfect time for an interview because Julie has just had the go-ahead from her publisher Allen & Unwin (great supporters of the graphic novel) for Shoestring, the companion book to KidGlovz. Julie actually wrote it as a sequel soon after completing KidGlovz. It’s now less a sequel than a discrete work even though the characters of KidGlovz and, of course, Shoestring reappear and Julie is rewriting it so that it will become an illustrated, rather than ‘graphic’ novel. She is translating potential visual images and jokes into words but there will still be 100 pictures.

Shoestring will be published in 2018 and a third book will then be in the pipeline, featuring Sylvie Quickfingers, a stolen child prodigy who has a cameo at the end of KidGlovz.

Even though writing is ‘arduous and difficult’, Julie is ‘only interested if the work excites me’. When I asked Julie if her editor and publisher need to restrain her creative brain with its original perspective and perhaps prevent her from straying too far into a wondrous strangeness, she replied that they are formative, ‘They encourage me to go further’.

Julie’s picture book The Coat has been greatly acclaimed. Its illustrator, Ron Brooks, happens to live across the river from Julie, but The Coat was not a collaborative work – Ron illustrated Julie’s story after she wrote it.

Julie’s subconscious seems to be continuously at work, with the gloves being a recurring motif in both The Coat and KidGlovz. She’s often ‘not aware of this stuff till a bit later.’ Music is another motif rising throughout Julie’s books such as Song For a Scarlet Runner, winner of the inaugural Readings Children’s Book Prize and shortlisted for multiple prestigious awards. Julie studied the trumpet and sang Bulgarian folk music, which took her to ‘another realm’ and showcased her ‘larger than life self’ when she was on stage.

Secondary characters such as Splitworld Sam from KidGlovz and Siltman from Song For a Scarlet Runner are both otherworldly figures. Names, such as in Julie’s junior series Little Else, illustrated by Beth Norling, are important to Julie. She knows she’s not on the right track if she doesn’t have the right names for her characters. 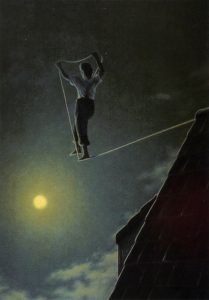 It was a pleasure to meet this extremely talented author. Julie is a delightful person, with a generous  smile and laugh. As a writer, Julie feels like the tightrope walker in the famous postcard by Quint Buccholz. She steps out and ‘hopes for the best’.