I was but a babe in arms when Cyclone Althea swept across Townsville on the eve of Christmas in 1971 however, I will never forget the noise of it; the warning sirens, the howling winds, the pelting rain. We were hushed into submissive silence by the storm screaming to get through our walls; muted by the all-consuming blackness, the sheer force of it. And then afterwards, struck again with incredulousness; our roof still over our heads whilst every other in the street lay shorn off, twisted and deformed in backyards where they didn’t belong.

Images like these are hard to erase. A few years later, another cyclone, this one by the name of Tracy struck at a similar time of year, blighting a similar town, producing similar indelible memories for the survivors. 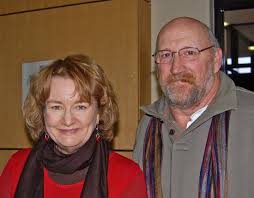 45 years on, powerful storytelling duo, Jackie French and Bruce Whatley mark this event with their new picture book, Cyclone. It’s hard to ignore the images of this beautiful work, as well.

Following in the same potent spirit of their Flood and Fire collaborations, Cyclone focuses primarily on a single tragic natural disaster, which had cataclysmic consequences for not only the community it affected but also many others across Australia. The results are profound and moving, yet also hopeful.

A storm brewed out at sea on the 24th of December 1974, yet the residents of Darwin hunkered down, unconcerned, too preoccupied with the imminent arrival of Santa Claus to worry about a fairly normal occurrence for them. When Cyclone Tracy unexpectedly swung and hit Darwin full in the face, she did so with such vehemence and force that the township was taken unawares. As the BOM quoted, ‘The entire fabric of life in Darwin was catastrophically disrupted, with the majority of buildings being totally destroyed or badly damaged, and very few escaping unscathed.’

French depicts this wholesale devastation with lilting verse that pays homage to the intensity of the storm as well as infusing the tragedy with a personal touch. The narrator, presumably a small expectant child waiting for Santa but faced instead with a wild beast who consumes their town overnight, is shown huddling with their family in their brick barbecue amidst a sea of destruction. 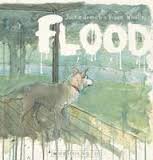 The poignancy of the situation and the degree of loss is beautifully rendered by Whatley’s pencil and acrylic wash illustrations. As with its two predecessors, I believe Whatley executed Cyclone’s drawings with his left (non-dominant) hand producing exquisite expressions of infinite detail and fluidity. Streaks, smears and runs feature in every landscape representing the force and chaos of the storm and later the pervading sense of new life, slowly seeping back, where ‘houses grow…day by day’ – my daughter’s favourite spread. The washed-out appearance and toned-down hues do indeed reflect the tone and look of a feature film reel likely to have existed in the 70s. The whole effect is goose bump raising.

Cyclone is an ode of sorts to the man at the end of the phone line French happened to answer one fateful day following the catastrophe of Cyclone Tracy as she manned the Information Section of the Department of Urban and Regional Development. She will never forget his despair, nor his tenacious courage to rebuild and move on. 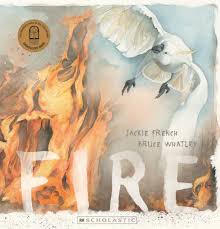 Like Flood and Fire, and Cyclone Tracy itself, Cyclone is a telling testimony to the legacy of good that can emerge from ravaged lives and homes. It cites that humans are ultimately survivors, capable of adapting and ‘inventing ways to live with whatever challenges the planet throws at them.’ We are reminded to respect the forces of nature and learn from our mistakes; a significant observation for those who have endured a natural disaster and for those of our more recent generations who have not. Highly recommended.

Have you ever borrowed a book from the library, only to discover at some horrifying point, that a page has been ripped out? Even worse, multiple pages? This happened to me recently, while reading Snail Mail – Celebrating the Art of Handwritten Correspondence by Michelle Mackintosh. I was nearing the end of this beautiful book and looking forward to seeing her envelope templates, only to find that some selfish reader before me had ripped all the template pages from the book. I was horrified, angry and disappointed.

I couldn’t believe a library user who would borrow a book about snail mail and sending lovely items to their friends and family to treasure, could also be a thief. Ripping out pages of a book is essentially stealing from the future. They are stealing information from future readers and in this case killing craft projects before they’ve even begun.

In this day and age, there’s simply no reason to tear out pages from a book. Every library has a photocopier/scanner, and they  could easily have photocopied or scanned the pages of interest when they returned the library book. They could have scanned it at home, at work or from a friend’s house. They could have taken a photo of the pages with their smart phone. They could even have traced the templates directly from the book.

Libraries generally allow their readers to borrow a book for 2-4 weeks, isn’t that enough time to make a copy of something you can’t bear to live without? Or heaven forbid, make plans to purchase your own copy?

Tearing out pages in a library book is essentially destroying public property. Libraries are funded by the Government and are for the entire community to enjoy. Stealing from one, damaging a book or defacing property robs future patrons of what you yourself have enjoyed.

The scene from Dead Poets Society when Professor Keating (played by the late Robin Williams) encourages his students to rip out pages from their poetry textbooks is inspirational, however we don’t live in a movie.

When a library book is damaged in this way, it is often taken out of circulation. In this case, the copy of Snail Mail I borrowed was the only copy in the Port Phillip Library service, and after I informed staff of the damage, they advised me they would have to take the book out of circulation and wouldn’t be replacing it. What a shame and so unnecessary. But it’s not just library books that are being vandalised in this way. Earlier this year I saw a woman tear out a page from a magazine in a waiting room and put it in her handbag. Naturally I confronted her about it and told her she was being incredibly selfish. I pointed out that waiting room magazines are a courtesy and there to be enjoyed by all and she was ruining it for everyone. I don’t think she cared much, but when did we become so greedy and selfish? What does this teach our children?

I’d like to hope that readers of this blog would never do such a thing and I encourage this community of booklovers to stand up to this sort of behaviour if you ever see it happening. Make sure you report any damage to your librarian as soon as you see it, and let’s preserve the reading material around us for everyone to enjoy. Brand new and hot off the press, and already sold out on the first print-run is the popular, My Dad is a FIFO Dad!

My Dad is a FIFO Dad was written by Queenslander, Jo Emery, mother of three and wife to Steve who works in Australia’s Resource Industry interstate. She wrote the book as both an emotional outlet and as a means of supporting other families experiencing the hardships associated with a lifestyle where fathers work away from home. This touching tale highlights tender and heartwarming moments; times of sadness, strength and pure joy.

Dads can still be the greatest, most involved and loving dads, despite working interstate for three weeks in every month. The book begins with a gorgeous sentiment and drawing of an aeroplane by the child narrating the story. We are then captivated by scenes of a fun, animated father role playing with his three children, riding bikes and scooters in the outdoors, and snuggling together for a night time story. But when Dad’s away, the little girl asks her Mum why he has to go away so often. To highlight his job’s importance she explains how Australia utilises its resources, which is nicely weaved into the story; here and again at the end.

Also beautifully integrated is the girl’s sense of longing, but also of resilience and warmth as she continues her daily life as a ballet dancer, swimmer, bike rider and at school, and she knows she’s making him proud. Thinking responsibly and positively helps the little girl to solve problems involving having accidents, friendship issues and boredom.

Dad is always in the girl’s heart and mind; whether they are interacting over the internet, when she expresses her thoughts in her diary, and she especially relishes when they are finally reunited and hold each other in their arms once more. Funny
Intelligent
Fantastic and
One of a kind.

He’s MY Dad
And I think that’s pretty important!

Jo Emery’s My Dad is a FIFO Dad has a clear purpose in connecting with other families with FIFO/DIDO work arrangements. A clever inclusion is an activity sheet for children to write about their Dads. The emotions in the story are perfectly depicted in the pictures by the talented author / illustrator, Ann-Marie Finn. The use of mixed media incorporates a wonderful balance of detail and movement in those active moments, and simplicity and calmness of the scene when the little girl reflects.

My Dad is a FIFO Dad is a touching book about family unity and resilience, with a dash of humour, that young children will both enjoy and gain strength from. It is a relevant and valuable support resource for many families around Australia and the world.

Look out for a fascinating interview with the author, Jo Emery, coming soon!

You can find more information about Jo Emery and My Dad is a FIFO Dad at the following websites:
http://www.mydadisafifodad.com/
www.facebook.com/mydadisafifodad