Welcome to the blog John. What can you tell us about your new book The Tao Deception? It’s an eco-political thriller, but what’s it about? Thanks Tracey. In The Tao Deception, a rogue Chinese elite – The Ten Brothers – conspire with the Hermit Kingdom, North Korea, to use spine-chilling technology to wipe out the West. Why? They’re committed to cutting dead the rampant global consumerism that’s turning China into the world’s waste dump and destroying the planet. Also, they’re bent on backing China away from its modern “path to prosperity”, U-turning it to its simpler, pre-industrial, rural roots.

Tori Swyft, ex-CIA spy, Aussie surfer and now global corporate wunderkind, is visiting China, working on a mega-merger between Chinese and European tech companies. She unearths the plot and, risking her life, is in a race against the clock to stop it.

What was your inspiration for the main character Tori Swyft?
What inspired Tori Swyft was a glaring literary deficit … the dearth of women as thriller heroes … the lack of female James Bonds. So I decided to create one.

So I’m especially thrilled that you’ve name Tori as ‘THE female James Bond’ in your review over at Carpe Librum.

Like James Bond, Tori’s young, tough and sexy, constantly finding herself in pickles most of us couldn’t possibly extricate ourselves from. But there’s more to Tori than that. This feisty, strong-willed woman carries a PhD in nuclear engineering and a Harvard MBA. People trifle with Tori Swyft at their own risk.

What inspired the threat in The Tao Deception?
On top of writing thrillers, I’m on the board of a global insurance company. Three years ago, when discussing the Top Ten emerging risks for the insurance world, a risk I’d never heard of jumped out at me and grabbed me by the throat.

I won’t say what it is – spoiler alert! – but it’s what The Ten Brothers in The Tao Deception are conspiring to unleash on the world. Experts disagree on how likely this risk is in real life. But if it did happen, the outcome would be catastrophic … a US Congressional Committee says that 200 million Americans would die within 12 months … from starvation, disease and societal collapse. What are you reading at the moment?
I’m juggling four books right now, three as research for my next Tori Swyft novel:
1. Eric Siblin’s The Cello Suites, about J.S. Bach and Catalonian cellist, Pablo Casals
2. Marc Goodman’s Future Crimes – Inside the Digital Underground
3. George Orwell’s Homage to Catalonia
4. Clive James’ Gate of Lilacs – A verse commentary on Proust – for its sheer delight (but also for Tori – see below)

What books might we be surprised to find on your bookshelves at home?
How about a 1st edition of J.D. Salinger’s Nine Stories, his second and arguably scarcest book? A slim volume, it’s heavily annotated by a notable mid-20th century American editor, critic and author, Maxwell Geismar. His notes give a fascinating glimpse into the mind and working methods of a major literary identity.

In the margins of one story, Geismar’s blue biro scratches this out: ‘This hero is better than Holden Caulfield of Rye … This is really the best story! … Most authentic … Good? … So far.’

What book have you always meant to read but never got around to?
Like Tori Swyft – who’s always trying to read this one at the beach – it’s Marcel Proust’s À la Recherche du Temps Perdu. A journalist once asked Australian Prime Minister Gough Whitlam if he’d ever read it, and he answered, ‘I’ve glanced at it extensively.’ That’s my approach too.

That’s hilarious, I must remember that phrase (I’ve glanced at it extensively). In your bio, I noticed that you sit on the Council of the National Library of Australia. What does that involve?
It’s been one of the most exciting boards I’ve had the privilege to sit on. Sadly for me, my term just expired. The NLA is a haven for Australia’s heritage. Two of the most exciting NLA projects I got to contribute to, in a small way, are Trove – the NLA’s astonishing on-line research resource which many authors use extensively – and the massive project to digitise the Library, to make it accessible on-line to all Australians, no matter where they live.

What’s next? Will Tori Swyft be back?
Tori Swyft is definitely on her way back, taking readers to Barcelona, Spain. She’s already four chapters into her next thriller, and the crisis she’s up against has got me sweating about how she’s going to survive. 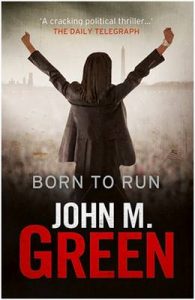 As well as Tori Swyft, I also adore a lead character from an earlier novel Born to Run, my US President Isabel Diaz – the first woman to ‘really’ to win the White House. Isabel had a cameo in my first Tori Swyft novel, The Trusted, and gets a far bigger role in The Tao Deception.

But I’m going to let you into a secret … while writing The Tao Deception, I recalled how much you raved about Isabel’s deaf stepson, Davey, when you reviewed Born to Run way back in 2011. Remembering that prompted me to bring Davey back in The Tao Deception. And I’m glad because he adds a crucial dimension to the story.  So thank you, Tracey! Davey’s return is down to you!

Wow, that’s amazing, what a thrill! I love it when authors listen to feedback from readers and to know I had a part in bringing Davey back is so exciting. Thanks John for sharing your secret and for joining us here on the Boomerang Books blog.

I’ve always enjoyed the acerbic wit of Australian-born critic and writer Clive James, so it saddened me when I recently read that he is soon likely to write no more. Various newspapers reported on James’s struggle with leukemia, quoting directly from an interview he recently gave BBC Radio 4 program Meeting Myself Coming Back, and it seemed the outlook for him is very grim.

“I’m getting near the end. I don’t want to cast a gloom, an air of doom, over the program but I’m a man who is approaching his terminus… I’ve been really ill for two and a half years. I was diagnosed with leukaemia, then I had COPD [chronic obstructive pulmonary disease], which is a fancy name for emphysema, and my immune system packed up. And that’s just the start. I almost died four times.” Particulary poignant were his wistful comments that he might never see Australia again. “I’ve been so sick since January 2010, especially my lung disease, that I’m not allowed to fly,” he said. “You couldn’t get enough oxygen aboard a plane for me to get me to Sydney.”

Clive has been a prolific writer with a penchant for stressing humour over accuracy; his first almost-autobiogrpahy  Unreliable Memoirs was published in 1979 and followed by four other volumes of autobiography, several books of poetry, four novels and literary criticism and essays spanning over the last 40 years. It was a surprise to me to discover that his pen might be so soon and abrubtly halted and apparently it was a bit of a surprise for Clive too, who woke up to discover that rumours of his impending demise were being greatly exagerated.

Apparently the Daily Mirror cherry-picked out quotes from an interview he did with the BBC. And that Daily Mirror story, picked up around the world by news outlets, soon had readers convinced that Clive James was at death’s door.

Not so, says the man himself. “On Thursday morning the Daily Mirror carried an interview with me. It was harrowing. You would have thought that I had only a few hours to live. The strange thing, though, was that I never gave the interview to the Mirror. The newspaper had got hold of a transcript of the BBC radio show Meeting Myself Coming Back and selected a few dozen quotes so that I seemed to be practically expiring in the arms of the journalist assigned to register my dying breath.”

The Daily Mirror journalist took his verbal comments out of context and deliberately played up the worst. “In the radio interview I say that I am getting near the end of my life. Well, at my age everybody is. But if you put the statement as baldly as he did, it sounds as if I am passing out in the journalist’s lap. To be the kind of newspaper writer who doctors fiction until it sounds like fact is to work a confidence trick. I admit that everything attributed to me by the Mirror journalist I did actually say in my BBC show, but he shifted the context by leaving out when and in what circumstances I said it. He thus turned one kind of fact into another kind of fact, which means he turned it into a fiction.”

Clive isn’t the first writer to have his obituary penned obscenely early.  Samuel Taylor Coleridge was pronounced hanged while still very much alive. Ernest Hemingway had a scrapbook of his obituries, when after a plane crash he was erroneously reported dead. Rudyard Kipling‘s death was incorrectly announced in a magazine, to which he wrote, “I’ve just read that I am dead. Don’t forget to delete me from your list of subscribers.”

Most famous of all is Mark Twain who was placed dead or close to it on two occasions, who gave us the sentence that all other would respond with from there on it – “The report of my death was an exaggeration” (which is usually misquoted as “The rumours of my death have been greatly exaggerated”). Let’s hope that in James’s case the reports are as ridiculously early and there’s plenty of life left in him – and his pen.