Hannah Kent is a master of atmosphere and of extracting her characters’ souls. Her new novel The Good People (Picador, Pan Macmillan Australia) is set in 1825, in a dark and dank Irish valley where, “Mushrooms scalloped out from rotting wood in the undergrowth. The smell of damp soil was everywhere”. The community has a peasant culture of simple rituals governed by the seasons, alliances and health. The effects of petty, and more serious, quarrels are balanced by small daily kindnesses. Could The Good People be shadowing the author’s Burial Rites as the second in a possible trilogy based on true stories about women living in wretched poverty whose fates are controlled by powerful men and others?

In The Good People, Nóra’s husband Martin has died inexplicably at the crossroads. The tale opens with his wake. Nance Roche comes to keen and wail for Martin. She is a “handy woman”, the gatekeeper of the thresholds between the known and unknown who lives in an isolated mossy cabin dug into the mud. She keeps it as clean as she is able, cares for her goat and collects healing herbs. She has inherited “the knowledge” of the Good People, fairy knowledge that cures people from the folk whose lights are seen near the whitehorn trees by Piper’s Grove.

With both her husband and daughter Johanna dead, Nóra is left alone with Micheál, an ill-formed child who can’t speak or walk and continually soils himself. She employs red-haired Mary Clifford from the north to help her care for Micheál. The gossips believe that someone with red hair has the evil eye. Nóra’s daughter also had red hair and some insist she was “swept”, taken by the Good People.

Mary cares for Micheál selflessly but Nóra and Nance believe he is a changeling, a fairy child who has been exchanged for a human child, bringing bad luck on the village. They resolve to “put the fairy out of him”, taking him to be dunked in the river three times.

Superstition escalates when a cow is found dead, chickens are left headless and an egg is filled with blood. Nance is accused of making piseóg, curses, and of poisoning people with her treatments of “bittersweet” and foxglove. And yet she describes the dying year as, “The night was falling holy, as though the glory of God was in the changing of the light”. 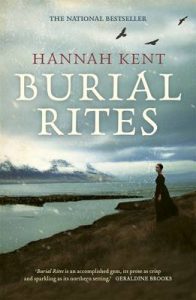 Whose viewpoint is right? Hannah Kent makes us believe in the veracity of the superstitious Nance and Nóra because she has plunged us into their lives and thoughts. But if we extricate ourselves from their powerfully constructed beliefs and peer through the eyes of their opponents, could the latters’ views be equally valid? One of the author’s gifts is to coax us into relinquishing our, perhaps more reasoned, views and to accept those of her protagonists.

The Good People of the title are alluded to but never seen. But are they more or less integral to the story than the human good people we meet: kind neighbour Peg O’Shea and steadfast Peter, as well as the multifaceted major characters? Goodness, grief, mercy and truth are wound with verisimilitude into The Good People. Few debuts have garnered as many accolades as Burial Rites, so if “second novel syndrome” is a real thing, it must apply doubly for Australian author Hannah Kent. Thankfully we’ve not had to wait long for Kent’s second novel — no decade-long interlude á la Donna Tartt — and it’s every bit as immersive as its predecessor. The Good People is a sparkling examination of Irish folk medicine and a lapsed belief system, and what happens when the real world – cold, stark reality – intercedes with these once-cherished folk traditions.

Set in south-west Ireland in the year 1825, tragedy unites three women together, and instigates an irreparable expedition that will challenge their beliefs, and see them clash against contemporary ideals. The tragedy in question centres around Nóra Leahy, who has lost her daughter and her husband in the same year. She is now burdened with the care of her four-year-old son, Micheál, who is severely disabled, both physically and intellectually. Micheál cannot walk or speak, and Nóra, knowing what will be said about the child, keeps him hidden from those who might consider his nature the evidence of otherworldly interference — touched by Them, the Good People.

Unable to cope on her own, Nóra hires a teenage servant girl, Mary, who quickly learns what sections of the community are saying about Nóra’s grandson: he is the cursed creature at the epicentre of their town’s grief. And in such circumstances, there is only one person they can turn to for help; one person who can force Them from Micheál, and return the young boy to his true self: Nance Roche, a woman with ‘the knowledge,’ who consorts with Them, and has demonstrated her healing abilities before. But her neighbours grow increasingly weary of Nance; the town’s new priest, in particular, is vehemently against her practices, and is gradually twisting the people’s opinion of her. Nance is determined to heal Micheál and prove her abilities to the township.

As with Burial Rites, the true genius of The Good People is Kent’s massaging of history — her many months of gruelling research — into her narrative. The Good People is layered with historical accuracy, bringing to life countless Irish customs without ever becoming bogged down in the verisimilitude. The plot is straightforward — the trio of women hurtle towards a conclusion most readers will anticipate but won’t be able to turn away from — and the characters, and their choices, will resonate long after you’ve put the book down.

Indeed, The Good People is a novel that will leave you marvelling at long-forgotten Irish customers and traditions, and have you question how the religious beliefs of today intercede with mankind’s increasingly practical and scientific nature. Kent’s artistry is that she needn’t tangibly pose the question; it’s the nuanced message of her novel, which will be enjoyed, and cherished, purely for its narrative alone.

Readers will inevitably ask, “Is it better than Burial Rites?” But I’m not sure it’s a question I can honestly answer. They’re both standouts; wonderful novels by an author with the world at her feet. The Good People boasts beautiful prose coupled with a brutal landscape and memorable characters. It’s a real literary treat.