I am not a fan of long running crime series. While a recurring character can be like a familiar friend sometimes the longevity of a series means it falls into the realm of incredulity. Tess Monaghan was a character I fell in love with but was also quite happy when she was put on the back burner. Added to this is the fact that the stand-alone novels Laura Lippman started writing were truly exceptional and amazingly got better and better which meant Tess wasn’t too badly missed (although she did pop up from time to time in these stand-alone novels).

This is the 12th Tess Monaghan book but only the third one since 2008 (one of which was a novella). While I was not overly excited to see Tess return I was still keen to read as it had been a long while since last she appeared. And I have to say I did miss her. Not only was it great to have her back and refamiliarise with her sense of humour, appetite and life but I think this is one of the best Tess Monaghan novels yet.

The last we saw of Tess she was pregnant and not enjoying it. We catch up with Tess three years later. Tess is balancing her life as a PI with her three-year old daughter Carla Scout and her de facto husband’s bar. Like all working families Tess’s life is in fine balance that is constantly tilted by the life of a toddler. Laura Lippman captures this balancing game brilliantly and Tess, despite a severe lack of confidence in herself, is perfectly suited for it.

Tess gets a case which she thinks is going to be perfect for paying the bills. A wealthy but controversial woman has returned to Baltimore from overseas. 12 years previously she gave custody of her two daughters to her husband after being found not guilty in the death of her third daughter by reason of insanity. She has returned to try to be a part of her now teenage daughters’ lives and to make a documentary film. Tess has been reluctantly hired to assess her security arrangements. A soft gig she takes despite misgivings about the woman’s intentions. But when strange notes begin being left for the woman and then quickly escalate Tess must try to put aside her own judgements to discover the truth. A truth no one wants to confront.

This novel is everything Laura Lippman has been doing so well in her standalone novels but this time with Tess Monaghan. Lippman takes a confronting but tragically all too familiar crime and explores the fallout, years later, for all those involved. Combined with the ups and downs of parenthood this is not only a page-turning addictive mystery but an exploration of motherhood and the lengths, good and bad, mothers will go to for their children. 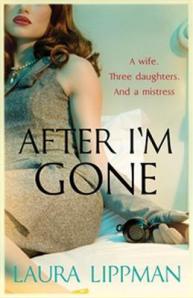 Laura Lippman delivers another absorbing thriller that sucks you in with vivid characters and great plotting. Inspired by a true story of a Baltimore mobster who went missing in the 1970s while under house arrest, Lippman does what she does best, sees a side to the story more interesting than the headline, the people left behind.

Felix Brewer had it all; a beautiful wife, three wonderful daughters and money, via a successful numbers racket. But when it finally came time to face the music, in 1976, Felix ran, leaving everything and everyone behind including a host of unanswered questions. And another woman.

The story jumps from 2012 back to 1959 and slowly comes forward. In 2012 a cold case is reopened by retired city homicide cop Roberto ‘Sandy’ Sanchez. Felix’s girlfriend, Julie disappeared in 1986. Everyone assumed she had gone to join Felix. However her body turned up 15 years later and now her murder, like Felix’s disappearance, remains unsolved.

Through the alternating storyline we get to know the people Felix left behind. His wife Bambi, his daughters Linda, Rachel and Michelle, his best friends Burt and Tubby and his girlfriend Julie. We see the impact his disappearance had on their lives and the jealousies that festered between them all.  We also start to learn the secrets, half-truths and lies that have been built around them. Protecting them, shielding them and ultimately betraying them all.

Laura Lippman is the master of this kind of storytelling. Not only does she create intricately built, suspenseful mysteries but she totally absorbs you with wonderfully realized characters each of whom is coming to terms with their place in an ever-changing world. Each of whom bears a responsibility for what has happened but all of it ultimately stemming from being left behind.