As the mercury level rises and your pool swells with screaming kids, it might be time to reach out for a reason to remember why you love summer, and kids, and Australia! Here is a real mixed swag of reads full of the flavour of Australia Day. Australian’s Let Us Barbecue! I featured this one just before Christmas but it’s still worth popping on the bonus CD by Colin Buchanan and Greg Champion for that extra dollop of Oz. Along with the iconic illustrations of, Glen Singleton, every bit of Aussie swank and summer backyard tradition have been merged into the tune of our Australian National Anthem. Throw your thongs in the air and enjoy the rousing recital and sing-along. It’s not just all about burnt black snags on the barbie. The lads take us over rugged mountain ranges, across scorching desert plains, around the Rock, through the Whitsundays and back again. I am on that sailboat and in that Kombi thanks to Singleton’s dynamite depictions. An exemplary example of an Aussie summertime that must be experienced by everyone. Quintessentially, unashamedly Aussie. Now that everyone’s levels of Aussie-rama are peaking higher than the midday sun, grab The Little Book of Australia’s Big Things by Samone Bos and Alice Oehr. This nifty little hard back features an amazing assortment of Australia’s BIG things from bananas, lobsters and trout to guitars and bushrangers. Fun, informative, and loaded with cheek and colour, this guided-tour-around-Australia-collection has a charming retro feel with dozens of activities, recipes, and pop-out pages for little ones to craft their own big things. The dust jacket forms part of the fun too, folding out into a big Australian panoramic scene. Too true! It’s enough to make me want to jump in the Kombi again and track these all down for the heck of it. Highly recommended. 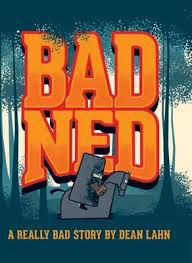 of bushrangers, check out a really bad story by Dean Lahn. Actually, his picture book, Bad Ned isn’t all that bad – that’s just the subtitle. The bad face, explosively bold text and cartoon-esque styled illustrations are comically quirky and a pleasing parody of a little boy’s imaginative day. Bad boy Ned models himself on the notorious bushranger, Ned Kelly but at the end of the day, his naughtiness becomes unstuck, literally. More entertaining than expected however the sudden ending may require explanation for young readers not familiar with our bush-rangering lore.

Omnibus Books imprint of Scholastic May 2015 Indigenous author, Warren Brim hails from Far North Queensland, as do I, so it was a marvellous treat experiencing ABC Dreaming. Unlike some learn-the-alphabet books, ABC Dreaming depicts a unique array of Aussie (rainforest) characters, fruits, and flora. The stunning x-ray line, dot artwork paints each subject against a vibrant background that best accentuates its unique features. From Red-eyed green tree frogs, mozzies and nutmeg pigeons to yabbies and xanthorrhoeas (blackboys or grasstrees), this is a beautiful and stimulating way for little Aussies to learn their ABCs. But of course, little Aussies take on all shapes and forms. If you’d like to spend Aussie day appreciating your family’s diversity and background or the culture of others who make up our great society, cast an eye over Tania McCartney’s and Tina Snerling’s latest additions to their Twelve Months in the Life of Kids series. An English Year and A Scottish Year are as good as actually being there. I encourage you to visit this awesome series of picture books that allows Aussie kids better beautiful contact with kids outside their ‘norm’ of experience. Lavishly illustrated, meticulously thought out and superbly accurate, An English Year invites you to experience the English isle, its inhabitants, and rituals without the need of a passport. Better than a bacon buttie. Exploring the highlands and lowlands of Scotland is just as fun as well. You’ll be visiting this one time and time again if nothing more than to practice pronouncing the Celtic mouthfuls of place names, traditional fare and annual events. Fun and informative. Breezy yet substantial. I have to say, I’m a little bit in love with this series. Potentially so useful in the classroom and home. Of course, if it’s Aussie flavour you’re after, An Aussie Year is the non-fiction picture book choice. I embrace the digital dexterity of our young generation however confess that I sometimes get a lot more joy from thumbing over pages of facts and images rather than endlessly scrolling and clicking. There’s something so organically satisfying and enriching reading an old tome style encyclopaedia. Renowned history and science writer, Peter Macinnis has created a sensational collection of historic events for primary and high school students in, The Big Book of Australian History that I am delighted to thumb through.

From the time Gondwana broke up to when strangers arrived in the 1600s to our present day milestone-makers, this is a truly superlative treasure trove of highlights, did-you-knows, ancient discoveries and of course stunning images, photographs and maps. As stated by the National Library of Australia, The Big Book of Australian History (shortly to be followed by The Big Book of Indigenous History) ‘is a book to dip into and savour’, an ‘enthusiastic retelling of Australia’s story that is infectious’. Informative text is presented in a non-over whelming way and broken up into logical chapter chunks flowing chronologically from the Dreamtime to modern day, finally entreating readers with the proposition that they are tomorrow’s history makers. Bloody marvellous, if you’ll pardon my Aussie vernacular. But then of course, it is time to salute our Aussieness!