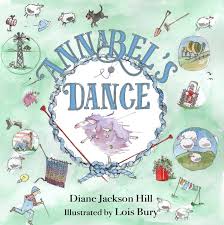 I mentioned last week the merits of not judging a book (or a person) by its cover. Today my hypocrisy shows for I’m rather partial to the cover of our Part 2 picture book review about dealing with differences, newly released, Annabel’s Dance, by Diane Jackson Hill and Lois Bury.

It’s quirky and sweet, exudes fleecy softness yet is eye catching and dare I say, more than a little sheepish, which is all rather fitting for Annabel’s Dance tells the hitherto untold story of a sheep whose unique appearance and delicate constitution sadly alienates her from her mainstream counterparts, aka The Mob.

High on a hill lives not a lonely goatherd, rather Annabel’s flock that are everything you’d expect of a mob of sheep; clean, docile and conforming. Then there is Annabel who is anything but. She is messy and unkempt, erratic and in a constant state of disarray. Her oddball behaviour does nothing to endear her to her fellow sheep who are quick to push her aside and keep her there. 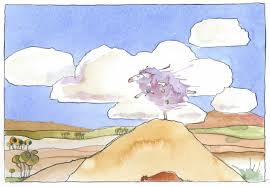 Annabel retains her fraught emotional balance by retreating within herself, repeating the mantra, ‘Hazy mazy oops a daisy, wriggle your ears but don’t go crazy.’ She tries hard to control her exaggerated reactions to every day events and smells and noises but her incessant restlessness offends the others’ sense of correctness so much so that she is shunned even more.

Annabel’s supersensitive responses exacerbate at shearing time thanks to the aggravating noises and sensations so she avoids it, until over many missed shearings, she becomes a prisoner of her own condition…and wool! To her detriment, one day her overgrown mantel trips her up, literally. Farmer Shanks springs to her rescue and resourcefully and caringly helps her to overcome her worst anxieties. This sudden special treatment forces the other sheep to re-evaluate their opinions about Annabel. But will it be enough for them to follow suit? 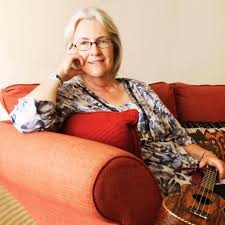 Hill developed the idea for this picture book in an attempt to understand the behaviours of her granddaughter and the disorders of ADHD and Autism. Whilst doing so, she learned the true life stories of individual sheep found in New Zealand, Tasmania, and Victoria who incredibly escaped annual shearing and have been found with up to 6 years’ growth of wool. Could they by supersensitive too? wondered Hill. And so, Annabel’s Dance was born.

And inspired it is. Hill’s rippling narrative and strong use of visceral vocabulary (wool the colour of ‘whipped cream’, growing in ‘tight crinkles’) is both appealing and entertaining. It conveys Annabel’s plight with sensitivity and respect so that we ache for Annabel but not in a pitiful way. Bury’s gorgeous illustrations focus largely on Annabel, she is the vivid abstract splat in the mob’s otherwise ordered life, thus in spite of her innate shyness, she stands out, a situation many young readers on the Autism / Asperger’s Spectrum will no doubt recognise and take heart from.

This is a picture book that deserves repeat readings and thanks to its robust thick feel pages and sensible layout, will stand up to them. Annabel’s Dance and all her uncontrollable wriggly jiggly quirks is a beautiful celebration of individuality that encourages readers to embrace and accept the exceptional abilities that hide within us all. You just have to uncover the wool over your eyes to see them!

Baaatastic for 3 – 6 year olds and lovers of woolly jumpers, everywhere.