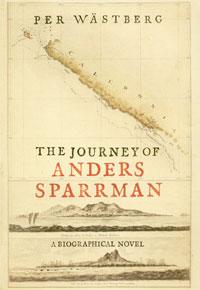 “On the 28th of January [1774] we penetrated into the southern regions as far as we could possibly go…no person before us had had the frozen honour of being further south.” So wrote twenty-six-year-old Anders Sparrman, who was sailing as an assistant zoologist, botanist and physician on Captain James Cook’s ship, Resolution. It was typical of his honest recording of the natural world that he also noted: “I could smell rotten penguin meat“.

Sparrman’s diary entries describing the light, the noise, the terror and the beauty of glacier-filled Antarctic seas are amongst the most compelling in this book. Yet this voyage to Tahiti, the Antarctic and to New Zealand was not his first venture into unmapped territory, and this description is only one of many of his vivid, acute and fascinating observations of the natural world, the people and the cultures which he encountered on his travels.

Anders Sparrman was a most remarkable Swedish natural scientist, whose early travels had taken him to both China and South Africa before he boarded the Resolution. He was just fourteen when he left the countryside where his great-grandfather, his grandfather and his father had all been church ministers, and went to Uppsala with his older brother to study medicine at the university. There he became the youngest disciple of the great Swedish botanist, Carl Linnaeus, who commissioned him (at the age of nineteen) to travel to China to collect and observe the natural phenomena. Since early childhood, Sparrman had been fascinated and absorbed by the world of nature, so he was superbly qualified for this task. And he continued his biological observations all his life, although he travelled little after the age of thirty.

After returning from Antarctica, Sparrman sailed once again on Linneaus’s commission. This time he ventured far into unmapped territory in Southern Africa, mapping and collecting specimens, and observing the natives and the Boer settlers as he went. In his surviving diaries, he give us a delightful picture of himself trekking into the bush to “observe the lilies on the ground and the daughters of the land” with a “whole regiment” of insects pinned around the brim of his hat because his insect box was full. The collection which he sent back to Sweden at the end of his trip was “the largest ever sent from Africa to any country” but his notes on the culinary delights of such things as fried elephant’s trunk, rhinoceros flesh and hippopotamus-fat soup, would horrify modern conservationists. His observations of the people he met, their cultures, customs and illnesses, are as acute as his descriptions of the country and its botanical specimens. Most of all, the horrors and cruelty of the slavery which he encountered and recorded made him a passionate abolitionist.

On his return to Sweden at the age of thirty, he set up practice as a doctor and midwife, and was given a ‘pension’ as the Keeper of the Museum at the Academy in Stockholm. Later he was elected to the Swedish Academy of Science and paid a stipend, which allowed him the time to order and describe his collection. Subsequently he was appointed Curator of the Cabinet of Natural History, a position which he held against strong opposition until just before his fiftieth birthday. In contrast to the freedom of his early childhood and the independence and adventure of his early life, these appointments exposed him to bureaucratic corruption, pettiness and social commitments which he scorned. Fortunately, it also brought him into contact with Lotte, a young woman with whom he shared love and friendship until his death in 1820.

Per Wästberg’s weaving together of the strands of Sparrman’s remarkable life from his books, diaries and letters, and from Wästberg’s own empathetic imagination, rescues a good and modest man from obscurity. His achievements in botany, the important part he played in the abolition of slavery, and his lifelong work for the ordinary, poor people whose doctor he chose to be, all make him a man who deserves to be remembered.

This book is not always easy to read.  Wästberg’s prose, initially, seems rather abrupt but his descriptions of nature are lyrical, and gradually his ‘voice’ begins to seem natural to his subject. The excerpts from Sparrman’s own diaries and letters are always absorbing and often funny. They offer a clear picture of a sensitive, intelligent, determined and honest character whose heart, always, was attuned to nature and who viewed all humankind as equally deserving of respect. This is a book to savour slowly – and to remember.

Fox is a beautiful book. The rich colours and textures of its illustrations are dramatic and satisfying and the hand lettering is interesting and unusual, although it may be a problem for some early readers. The story it tells is unusual and open-ended in a way that stimulates the imagination.

The story is simple and the language sometimes complex but not daunting. A dog finds a magpie with a broken wing and takes it to his cave to nurse it. Dog has only one eye. Magpie has only one useful wing. Together they help each other. Magpie flies through the air on dogs back and acts as Dog’s missing eye. Then  Fox appears. Fox entices Magpie away and runs with it to the desert where it leaves it to make its own way home. The final illustration is of Magpie jiggety-hopping away from the fiery red sun.

There are lessons here in friendship, loyalty, trust and deception, but nothing is spelled out and the vivid illustrations are a major part of the joy of the book.

Fox was first published ten years ago and has since won numerous awards. This anniversary edition is suitably sumptuous for a book which widely is regarded as an Australian classic.

The Princess and her Panther is a very different kind of picture book but children will identify with the princess and with the panther, both of whom are real children in dress-up clothes.

The first illustration shows panther having whiskers painted onto her face, and the garden inside the front and back covers is ordinary and familiar. The story begins one afternoon with an imaginary trip to the desert of the garden sand-pit. Princess is confident. Panther is nervous. The paddling pool becomes a wide blue lake and the garden tree is the wood where Princess pitches her tent. As night falls, the world becomes black, and strange noises begin, Panther tries again and again to be brave. Finally, “Enough is enough”. Panther finds her courage and the frightening, spooky night creatures are banished. The book ends with the sisters and their cat sleeping happily in their tent until morning and breakfast appear.

The story is simple but dramatic and there is plenty to discover in the illustrations on each page. A good bed-time story.