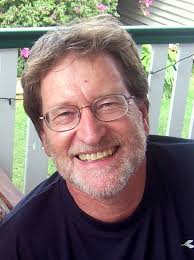 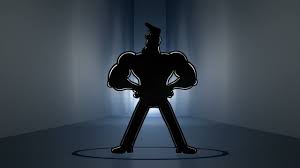 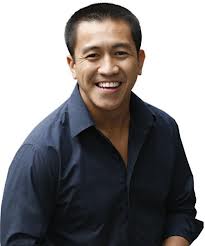 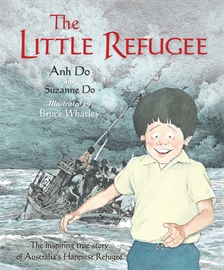 Anh Do – Vietnamese refugee, comedian, Australian, and all round lovely guy has a powerful tale to tell. His best-selling autobiography – The Happiest Refugee – has won numerous awards, including Best Non-Fiction Book of the Year at the 2011 Indie Awards, and tells the tale of his original voyage to Australia aboard a crowded fishing boat – the quintessential horror journey for any refugee.

In this beautiful picture book, an abridged retelling of this fateful oceanic journey, Anh and his wife Suzanne tell of a voyage of courage and hope. After fighting for Australia and America in the Vietnam War, Anh’s dad needs to take his family to safety. There is no other way. They must leave everything behind and board the boat.

Anh was just a wee lad when he left his war-torn home – along with his mother, father and baby brother – in search of a better life. A group of 40 men, women and children crammed into that small fishing boat and set sail, though searing heat and wild storms. The boat was even robbed by pirates, Anh’s baby brother Khoa dangled dangerously over the side of the boat, ready to be tossed asunder.

The pain and fear his parents would have experienced – I can’t even imagine, yet, the family held hope. Indeed, even when the boat was rescued and Anh began a new life in Australia (which beset a whole other set of challenges) his mother oft repeated that their fortunes would one day turn around. And indeed, through perseverance and faith, they did.

This is a beautiful, touching and insightful book. Watercolour illustrations by the masterful Whatley have a Japanese-style feel in their construction, and perfectly wrap this remarkable story – one experienced by so many around the world – in visual splendour.

Most generously, 100% of the profit from The Little Refugee will be donated to the Loreto Vietnam-Australia Program, run by the dedicated Sister Trish Franklin.

The Little Refugee is published by Allen & Unwin. Visit Anh Do’s website to learn more about his inspirational life journey.

I like Anh Do. I’ve been impressed with how likable, affable, down-to-earth, and funny he’s been each time I’ve seen him on TV. So I’m not entirely sure why I didn’t want to read his book. Or maybe I do, although I’ll admit my reasons are entirely superficial and arbitrary.

Even though I’m a massive non-fiction reader (as in I’m a voracious reader, not that I’m larger than the average person), The Happiest Refugee isn’t a title that sells itself to me. I guess it’s meant as some irony—both a reference to Do’s humour as a comedian and perhaps his gratitude at being able to make good in a new country. It likely also alludes to the tragedies his family has survived.

Still, it puzzles me. I like to understand why something’s the way it is, and I haven’t yet been able to do that with Do’s book’s title.

While I’m talking superficialities, I really, really, really dislike the book’s cover. Its orange and brown hues do the book a complete disservice. Its cheap design that includes a disproportionately large pic of Do superimposed in front of the photo of what we can assume is a fishing/refugee-transporting vessel doesn’t cry ‘pick me up and buy me’.

I’m surprised the book’s sold at all, and it’s probably testament to Do’s strong profile and not-to-be-dissuaded-by-poor-design fan base that it has. Truthfully, the only reason I read the book is that it recently won a bunch of awards and has had praise and controversy heaped upon it in equal measures (more about said controversy later).

Cover aside, I loved the book. It was light but extremely readable and perfect reading material for the long-haul flights during which I tackled it. Do’s a pragmatic storyteller who gives you plenty to contextualise and flesh out the story, but doesn’t waste time on flowery language. You can tell it’s written by someone well used to standing up and conveying stories in succinct, sharp bites that will hold your attention.

I should say that, bad cover or not, such pragmatic storytelling will always win me over. I quickly lose patience with speculative fiction, with its myriad manufactured languages and 73 million names for an orc depending on which species/tribe/magical caste a character belongs to. I find it distracts from the story, doesn’t in any way advance it, and catapults me out of the tale and into Frown Land as I try to recall what made-up words mean—call the orc an orc and get on with it.

But I digress from non-fiction written by a comedian who arrived in the country as a refugee to made-up worlds with orcs…back to Do’s book.

Do’s a nice guy with a wicked sense of humour. I completely understand why The Happiest Refugee has sold in spite of the design shortcomings (which aren’t Do’s, it must be noted—I’d say that the publishing house didn’t go all out on the design because they didn’t realise they were onto a winner). And why the book’s won awards.

It’s also Do’s storytelling style and sense of humour that makes the story even more heart wrenching. He disarmed me with humour and socked me with sadness—I was smiling about how his younger brother had to wear dresses when they first arrived in Australia, because that was what was donated to them, while at the same time feeling morose that that’s how dire their circumstances were.

That’s how the entire book felt to me—Do makes situations where he couldn’t afford text books or new sports shoes funny, while simultaneously showing us how tough it is to arrive in a country as a refugee (I kept thinking this book goes a long way to showing the real refugee story—read: human, rather than Today Tonight media panic trollop—and would help demolish racist stereotyping if we could just get the right people to read it). At no stage, however, does he come across as self-pitying or gushingly smarmy, and that’s a hard tone to strike and maintain.

There’s been some (alleged) ghostwriting controversy, but whether the book’s Do’s writing or his ghostwriter’s, it’s Do’s voice, and those stories can only have come from Do himself and his family. In fact, I’m less surprised that he had some help with getting the story down on paper than that he had it from a stranger and not his wife, who is apparently a writer.

I’d recommend The Happiest Refugee for a read if you can ignore the cover. My guess is that now that it’s proved a financial boon for them (and clearly it sold because of Do and not because of the artwork), Do’s publisher will be redesigning the book and re-releasing it at some stage with a much-improved design.