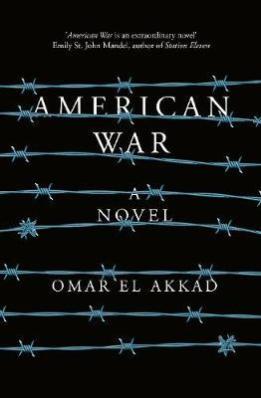 This amazing book took me completely by surprise. When I read that it was about a second American Civil war my immediate first thought was Trump. My second thought was another dystopian novel but Omar El Akkad’s novel defied all my expectations and is a strong contender for one of the books of 2017.

What makes this novel so profound is Omar El Akkad’s ability to tell a deeply personal story about a huge, cataclysmic event at the same time as weaving a story that is relevant to our society today despite being set in a future 75 years from now. El Akkad’s novel works on so many different levels and has so many different layers that as a reader you get completely lost in the time and history the novel creates.

The novel’s second American Civil War breaks out when the US Federal Government bans the use of fossil fuels. Southern States rebel against the North and war quickly follows. America, North and South, then unleashes its political, economic and military war machine against itself. Drones, biological warfare, political indoctrination, enhanced interrogation, rendition which inevitably leads to terrorism, suicide bombings and other extreme acts of desperation as the war escalates and then ebbs and flows between atrocities.

The story focuses upon the Chestnut family, following them over the course of twenty years. They are from Louisiana, living on the banks of the Mississippi ‘Sea’. When the war reaches them they are forced to flee to a refugee camp. Despite the war being construed as North vs South, Blue vs Ref the Chestnut family begin to learn it is more nuanced than just two sides. And the children of the Chestnut family, who a growing up in this war, a forced to pick a side. A choice that will have irreconcilable consequences.

What makes this novel so powerful is how recognizable events and their reactions are. From drones haunting clear blue skies to the idealistic being recruited to blow themselves up in crowded squares. From how quickly each side dehumanizes the other to the extremes each side goes to in the name of ‘the right’ and ‘the just’. The heart of the story is Sarat Chestnut who will break your heart as hard as hers is broken. There are echoes of Katniss Everdeen and The Hunger Games but the context is much closer to home. This is a novel of sublime scope and passionate precision. It is a warning and a requiem. This is one of the best books you will read this year.