Australia is well-known for its myriad of contrasts and tempestuous weather. Devastating bushfires, consuming floods, and cyclonic furies can weary even the staunchest of spirits. But, seldom ones to lie down in defeat, Aussies love to rise above a challenge; plucking inspiration, hope, and incredible optimism from the deepest of floods waters. 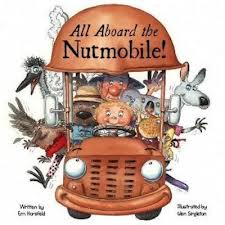 This is precisely how the team of Macadamia House reacted following the Queensland 2010/2011 floods. They rebuilt their farm and salvaged their business. And from this rescued kernel of a nut, grew the idea for their first picture book.

All Aboard the Nutmobile is a rollicking little adventure depicting the first encounter, Nosh the Nutmobile has with the inhabitants of Macadamia House. They’ve never seen a Nutmobile before and regard him with a mixture of awe and reservation. They are not particularly enamoured by his strange nutty, dome-shaped appearance and don’t care to make friends with him, preferring to argue and speculate amongst themselves as to what he really is. That is until, the weather turns foul.

Driving rains and ensuing floods threaten not only their sporting pursuits but soon their lives as well. Fortunately Nosh and his young driver Max, come to their rescue. And like all floods, the muddy waters eventually subside and it becomes clear that Nosh really is a very useful Nutmobile who’s earned his rightful place at the Home of the Nut.

Like the hundreds of Queenslanders who endured the floods, this creation is a valiant effort on behalf of the Macadamia House team. Launched late last year to coincide with the Year of the Farmer and the National Year of Reading, Nosh is the first in the Nutmobile series. The characters are straight out of the Fraser Coast hinterland; Boris, the maroon wearing cane toad is my personal favourite. (Although I am far less captivated by cane toads in real life) 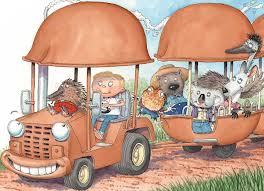 Kids from three to eight will adore Glen Singleton’s bold, bouncy, and wonderfully Australiana inspired illustrations. You already know his work if you’ve ever been to one of Queensland’ theme parks and used their maps to find your way round. The Twelve Days of Christmas and Santa Koala are other well-known favourites. 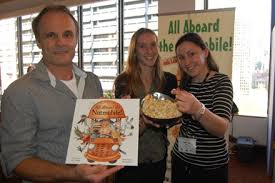 Newcomer to the writing scene but not the world of nuts is Em Horsfield. Her simple rhyming verse chugs along as surely and cheerfully as Nosh himself. And she knows her subject inside out, residing and working on a macadamia farm herself. Sweet.

All Aboard the Nutmobile not only entertains with its colourful cast of Aussie characters and oodles of charm, it humorously introduces young readers to various real life situations and outcomes and provides a platform for discussion of events that have affected many of them either dramatically first hand or from afar. 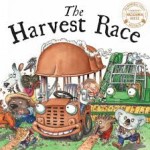 Watch out for the next instalment of Nosh, in The Harvest Race, August 2013 coinciding with harvest season. The third in the series should be released in time to fill your Christmas stockings. Perfect. 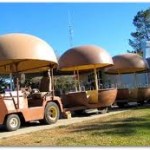 Yes I’m a fan of the delicious Queensland nut and the iconic Nutmobile (I’ve chugged around in one once or twice) but I admire good old Aussie benevolence and tenacity even more so. This picture book encapsulates both in bucket loads.