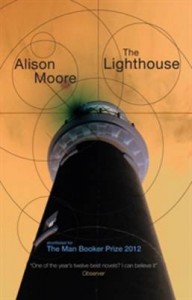 Futh is in his forties, newly separated from his wife, and taking a walking holiday in Germany. He hasn’t been doing much walking recently but he plans on doing fifteen miles a day and coming home fit and tanned. And he remembers walking with his mother and father as a child and, especially, a sunny day on the cliff tops just before his mother left them both to disappear in the USA. He was twelve when that happened, and his father  became unpredictably violent, so he would keep out of his way much of the time.

Futh is, above all, ordinary. He is unassertive, has rather limited social skills, and always inspects the escape routes from his hotel rooms in case of fire. His talisman, which he always keeps with him, is a silver lighthouse which once housed a bottle of his mother’s violet-scented perfume. But lighthouses, as the books’ epigram tells us, not only send out kindly light, they also wan of the rocks beneath. Futh’s life seems always to have more rocks than most.

Alison Moore’s book is deceptively simple. We come to understand Futh through countless ordinary details of his life and through his fragmented memories. Between the chapters about Futh, there are others about Ester, the wife of the hotel-keeper at whose hotel Futh starts and ends his journey. Esther craves attention from her violently possessive husband Bernard, who mostly ignores her. She compensates for this by taking casual lovers. Futh is not one of them but he becomes involved, all unknowingly, and the results are disastrous.

Esther life, like Futh’s is little different to that of most people. And it is this ordinariness and the small details of the characters’ day-to-day behavior which, at the end of the book, prompt questions about the accidents of life. Are our personalities shaped by nature or nurture (or lack of nurture)? Is the pattern of your lives determined by Fate? Does the appearance of Venus fly-traps at various parts of this story suggest that we are just like flies in the biological struggle for survival?

Nothing about Alison Moore’s story is as obvious as these questions but her smooth and subtle control of the reader’s mood and emotions has, in the end, enormous impact.