I can’t tell you how many times we’ve buried the book in my lifetime. The fact is that we haven’t buried the book, and however all this works out, we’re still not going to be burying the book. People are still going to be reading books, and whether they’re going to be reading them on a Kindle or as a regular physical hardcover book or a paperback or on their phones or listening to audiobooks, what’s the difference? A writer is still sending his or her work to you, and you’re absorbing it, and that’s reading. – Super editor Robert Gottlieb in an interview on Slate.com

If you’ve been reading the book news lately, you will have heard the media, the Australian Booksellers Association and cultural figures large and small ream out the Minister for Small Business, Senator Nick Sherry, for predicting the death of the bookshop. Just to jog your memory, here is what Senator Sherry said:

I think in five years, other than a few specialist booksellers in capital cities, we will not see a bookstore, they will cease to exist.

We don’t need to put our thinking caps on for too long to realise that the Minister for Small business probably made a bit of a tit of himself when he made this proclamation – as a piece of political rhetoric it was clearly a misstep. But just how wrong is the senator, and how upset should we really be?

The pundits would have us believe that we should be furious. As Don Grover, chief executive of Dymocks, said on the ABC: ‘I think it’s bizarre that he’s made that assessment … People love curling up on a lounge with a book, the physical nature of the product. The smell of a book still rates as one of the most significant reasons why people buy books.’

This from Mr Grover’s exhaustive study on the book-buying public entitled, ‘Why We’d Rather Smell Books Than Read Them’.

I mean, seriously, people. If the most significant reason for buying books is the smell, then the book trade is in even bigger strife than Nick Sherry believes. Luckily for those of us who love books, it’s not the main reason people buy them – and even if it were it wouldn’t save bookstores. You see, it is entirely possible to buy nice smelling books from the internet. And that is the threat to bricks and mortar bookshops – the convenience and range offered by online shopping.

The book trade is in flux, and that means physical bookselling is under threat. There will certainly be casualties. Some of them will likely be booksellers. Some of the fallout is likely to happen within the next five years. Get over it.

Conflating the ‘book’ as cultural artefact and the ‘bookstore’ as cultural institution is not helpful. Nobody thinks bookstores aren’t a big part of how people have traditionally discovered, obtained and fallen in love with books. But the changes confronting physical booksellers are an economic and cultural reality. Just as the bulk of independent booksellers were swamped by giant book chain stores over the last two or three decades, so the chains will be eclipsed by online booksellers. However, online bookstores do not, for the most part, provide the same kind of curation and community that bricks and mortar stores do. If booksellers want to remain relevant, then these are issues that need to be confronted head on – not ignored because we have dared question the viability of an existing institution. Not mentioning that bookshops are closing does not mean we didn’t notice the going-out-of-business sales all over the country.

The times, they are a-changin’, but that doesn’t mean we should panic. We are more literate and books are more accessible than ever before. They’re about to get even more so. How we help people find the books they want to read is one of the main challenges facing the industry. So let’s stop the hysteria in response to any suggestion that things are going to change. They are, but booksellers clinging to traditional models will not help them to reinvent themselves. 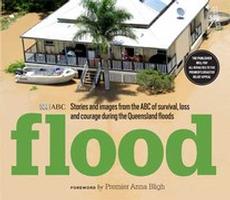 Brisbane is back on its feet, relatively speaking, but spend any time in the city and you’ll quickly realise that the recent flood is still very much on residents’ minds.

Conversations which are entirely unrelated veer back to the flood. Complete strangers share their own stories or offer condolences and sense of shock and awe. And cafes and restaurants that were flooded but that are now up and operating, pin snaps of the floods to their industrial-sized coffee-making machines—that’s, of course, the direction in which the waiting-for-coffee conversation flows.

I’m part of those conversations, having been evacuated from a client’s at West End, which was badly affected, to my own home at Windsor, which was flooded too. There’s no need to recount my tale here, because I blogged about my experiences at the time. This time I’m blogging about others’ accounts of the floods that affected the greater part of the supposed Sunshine State.

Thanks to HarperCollins, I was fortunate enough to get my hands on an advance copy of Flood, a book that they put together in partnership with the ABC. It contains a foreword by Premier Anna Bligh, whose accomplished handling of the event and rousing speeches—not least the cheesy, but precisely what we needed tenet that ‘we’re the ones that they knock down and we get up again’—warmed our hearts, raised our spirits, and had many calling for her to be PM.

The books’ royalties go to the Premier’s Flood Appeal, making its purchase feel good as well as, frankly, kind of like a keepsake of an event that will be etched as strongly on this generation’s memories as the ’74 floods were on the previous ones’. But the real winner for me is the fact that the accounts within it are written by ABC journalists I’ve come to know and love.

I navigate my days by the likes of Richard Fidler and Spencer Howson, and their calmness and information-rich ABC Radio efforts steered me and many others through the floods (refreshingly absent of some of the hysteria and ratings grabs that gripped some of the commercial media). What we didn’t get from many of them was their personal accounts and reflections. This book, a few months and the need to communicate weather, tidal, and clean-up-volunteering information immediately removed, gives them that chance.

Most striking, though, are the images of flood-affected Queensland. My first-hand experiences were confined to Brisbane, and even then to the few streets around my home. Some friends of mine did some sightseeing and, while we were all discouraged from doing so, I also understand why they did.

I didn’t and couldn’t leave my home, so this is the first time I’ve seen some of these images. They’re incredible and almost inconceivable—even to someone who waded through water, shifted sludge by hand, and who still looks out her kitchen window the high-tide stain on her neighbours’ house. If there’s anything I’m learning, it’s that there’s no such thing as too many images of the floods.

I’m not sure whether it was because I was personally affected, having to sandbag my home and watch the floodwaters rise and swallow the first few feet of it for days, but I got a little teary leafing through this book. It brought back some of the memories and emotions that were so raw that week, but it also made my heart swell with pride at Queenslanders’ (indeed Australians’) no-nonsense pragmatism and stoicism.

But that’s not selling the book well, and I should note that some of the images made me chuckle—it seems you can throw a disaster at Australians, but you can’t wash away their sense of humour. This book reminded me of the floating walkway, the aptly named Drift restaurant, the little tug boat that saved the day.

It also reminded me that we (and I mean Brisbane, not Grantham or Toowoomba) got off relatively lightly, especially when you compare our flood to the recent earthquakes in Christchurch and earthquakes, tsunami, and near-nuclear disaster in Japan. Relatively light or otherwise, the 2011 floods will be etched on our collective consciousness for years to come, and Flood goes a long way to documenting and commemorating it. It’s one worth investing in to both capture the moment and to contribute to Queensland’s rebuilding process.