Some of the best YA novels I have read recently span contemporary realism to fantasy, past to future, New York City to Ireland.

Two of the authors I’ve reviewed here will be making appearances at the excellent Reading Matters conference in Melbourne (see more at the end of these reviews). Another is about to arrive in Australia. The Call by Peadar Ó Guilín (David Fickling Books) is set in an alternate Ireland. Nessa and her cohort know that this is the year when they will be ‘called’ for a life-changing three minutes by the Sidhe, avenging fairies who have been forced ‘under the mounds’ by humans. Nessa has the extra difficulty of a damaged left leg but she throws herself into the physical and psychological training all the young people endure to give them a chance of escaping and returning. Any who return have been damaged in some way. Will Nessa be the exception? The Call is atmospheric, chilling and highly imaginative. Its originality and brilliance are unforgettable.

Peadar is about to make appearances at, at least, one Australian bookshop and the Perth Writers’ Festival this month. The Sun is Also a Star by Nicola Yoon (Corgi, Penguin Random House) is shooting up ‘best of’ lists. Natasha and her family live in New York City but are about to be deported to Jamaica. On her way to a last minute attempt to revert the decision, Natasha meets Daniel, a gorgeous Korean-American with a ponytail who breaks the mould.

Holding Up the Universe by Jennifer Niven (Penguin Books) follows the author’s stunning All the Bright Places. 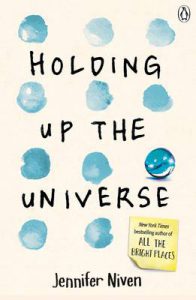 Holding Up the Universe takes us inside the life of Libby Strout, who starts high school after being homeschooled because of her obesity. She encounters beautiful Jack Masselin, who has prosopagnosia (a condition which appears in another recent excellent book which, for ‘spoiler’ reasons I can’t reveal here yet). Jack can’t recognise faces. The narrative explores both Libby and Jack’s universes, and how they intersect. Glory O’Brien’s History of the Future by A.S. King (Little Brown, Hachette) takes us further afield, into the future, as well as the present. Glory and her best friend Ellie, who lives on a commune, drink a petrified bat, which gives them visions of the future. Like Juliet in Bridget Kemmerer’s upcoming Letters to the Lost, Glory has lost her mother and makes sense of her world through photography. Glory O’Brien is a slow-burning and original piece of writing. Exceptional.

A.S. King and Jennifer Niven are both speaking at Reading Matters conference in Melbourne in June. Link here. What an opportunity to hear these brilliant authors.

Okay… one final post about book trailers (well, for the moment, at least). Last time around, I suggested that book trailers are perhaps becoming an art-form in their own right — a form of short film making. Take a look at this selection and see what you think.

Let’s start off with a big-budget, major release. From the people who brought you Pride and Predjudice and Zombies, watch out for Abraham Lincoln: Vampire Hunter.

Now, let’s go to the other end of the scale — Fury in the Garden: Dream Version by John Pagan. Judging by the website this book looks like is has been self-published by the author. The trailer is just text, computer graphics and music, but it’s effectively put together.

Now, here’s a really stylish trailer for The Dust of 100 Dogs by A.S. King. It’s mostly animated text with a voice-over. Simple but very cleverly put together. The vast majority of book trailers rely on text and still images, sometimes with a bit of animation. They tend to be a bit ‘same-old, same-old’. But every now and then, someone will take these standards of the book trailer and do something unique and imaginative. This is the case with The Dust of 100 Dogs trailer.

There are not a huge number of live-action book trailers out there, and the majority of those are pretty woeful. It’s usually the flashy, big-budget, blockbuster trailers that stand out in this category. But here’s a quiet little trailer. It’s simple and straightforward, without any fancy effects. But it’s well acted, well scripted and it works. It’s for Sugarless by James Magruder.

And finally, while we’re on live action, here’s the trailer for Gone by Mo Hayder. It’s very clever, well made and rather chilling. As the trailer itself warns, parental guidance is recommended on this one. I wouldn’t go showing this one to your five-year-old.

This trailer was put together by Paul Murphy, who also did the trailer for Kate Forsyth’s new book The  Wildkin’s Curse. Paul kindly stopped by to tell us a bit about the making of the Gone trailer.

“The publisher had given me a very simple brief: make a video for the web that is so scary people will forward it on.

I thought about what I had seen online that genuinely scared me, and remembered the real emergency call from a woman whose friend was being attacked by a chimpanzee. You don’t see anything in the video, but the audio is so raw – the woman sounds paralysed with fear, the operator is scrambling to understand what is happening, and meanwhile this crazed chimp is screaming in the background. I could picture everything as it happened, and it stayed with me for days.

That’s how I got the idea for a surveillance video synched to an emergency phone call. I developed it a bit further, and decided I didn’t want people to even know the woman’s daughter was in the car until after the attacker had driven off – that would be the twist that would leave people hanging. And that’s the point where I’d reveal it is the opening scene of a book.

It was very much a guerrilla production. One night, I drove a couple of actors to a rooftop car park. To get that high surveillance angle, I had to climb onto an enclosure with my camera and tripod. It was really windy, and I was worried I might get blown over the edge to a 10 storey drop below. We did four takes, and then got out of there before security was alerted. It would have been difficult to explain why a man was breaking into a woman’s car and driving off with it, only to drive back and do it all again.

For the audio, I recorded three other actors in a sound studio. I added the sound effects and mixed it to make it sound more like it was happening in a car. Finally, I played the mix through my mobile phone to give it that harsh, compressed tone.

I was really happy with the end result. Many people have said to me not only how disturbing they found the video, but how much they wanted to read the book afterwards. For me, that’s the most satisfying thing to hear. In all my book trailers, I’m not just trying to match pictures to words, but entice people with a story.”

For more info about Paul Murphy and his other trailers, check out his website Book Tease.

And tune in next time when Literary Clutter will take you Beyond the Book Trailer!