So, you’re torn between traditional sensible titles and contemporary crazy reads to fill your under 12 year-olds’ stockings. Why not splash out on both and please everyone. Here are some more stocking stuffers to complement the rollicking fun ones Romi featured in her Christmas inspired picture book round up. Time to get your Santa on. And what a Santa we have first up. Colin Buchanan and Greg Champion shine again in We Wish You a Ripper Christmas. Sing-a-long to this Aussie bushed inspired slice of summer fun. Santa Wombat is all in a fuddle after losing his delivery list. As he streaks across a burnished outback sky in search of his all-important catalogue for kids, he encounters the bush inhabitants madly making merry in readiness for Christmas day; koalas hanging tinsel, galahs rockin’ on, dingos wrapping thongs – well of course. But will he find his list in time? Choice watercolour illustrations by Roland Harvey, link-arms, sing-a-long tunes included on a CD and a surprise ending make this the perfect picture book gift for international visitors or your own tribe in here in Oz. What does Santa do When it’s not Christmas? is the question author illustrator Heath McKenzie puzzles in his Chrimbo-themed picture book released last year. McKenzie’s meticulously detailed illustrations glitter with festive cheer long after the last gift is delivered. Readers embark on a thrilling behind the scenes tour of the North Pole like never before where we are privy to the machinations of the Christmas Tree Angel aka gift trendsetter and planner, the Sleigh Pit Crew, the tireless Elves and the grunt and muscle of the Sleigh pulling team aka Santa’s Reindeer. Bubbling with fun and enigmatic suggestions, we never really truly find out exactly what Santa gets up to but can be sure that he’s always somewhere close by. Wink wink, say no more. Highly recommended fun for lower primary schoolers. 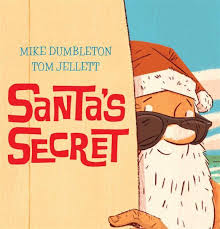 I think Mike Dumbleton and Tom Jellett may have uncovered the truth with Santa’s Secret. This splendid little picture book allows Santa one day to recover after a rather intense night of labour (2 billion pit stops no less) before he sets off on a flight to balmier climes. Forsaking fur-trimmed coat and winter jocks for a pair of boardies, straw hat and obligatory Hawaiian shirt – push pineapple if you please! – Santa lobs up at an old Aussie beach shack. He stashes the reindeer round the back, then…gets out, and cuts some cranking waves aka surfs, until the sun sets. True to his nature however, Santa doesn’t just leave with surfboard in hand, oh no. Ho ho ho! Delectable Aussie flavour ripples throughout this jaunty Christmas tale. You’ll love it and so will the kids. 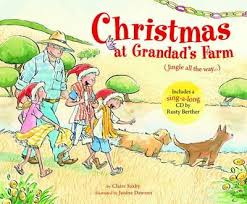 I love jingling my bells at Christmas time, who doesn’t? Claire Saxby and Janine Dawson have given young readers and me all the excuse they need to ‘jingle all the way…’ with Christmas at Grandad’s Farm. Loud, bold, bouncy rhythmic verse catapults this familiar tune to new heights as we visit Grandad’s Farm for some festive fun. The whole family is there, busting for a swim in the country creek and scoffing the Christmas treats before collapsing in the obligatory heap on the couch. Good old-fashioned Aussie festive fun. Some things never change. Only a CD would make this classic better. 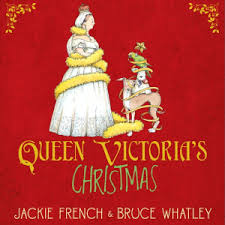 Speaking of classics, ever wondered how some of our most endearing Christmas traditions came into being? Jackie French and Bruce Whatley’s Queen Vitoria’s Christmas endeavours to disclose a few historical truths in this must-have Christmas classic. Portrayed from the royal canines’ point of view in loping verse and muzzle-high perspective, the mysterious behind door going ons in the palace home of Queen Vic and Al and their five children are eventually explained but more mystery ensues following the disappearance of the Christmas turkey. Jolly and droll, this is history served up with all the best bits included. Little readers who revel in sparkles and flickering lights, sugar plum fairies and stars shining bright will adore this look and find book by Anna Pignataro, Princess and Fairy A Very Sparkly Christmas. Festooned with more glitter than a winter wonderland morning this follows the quest of bunny friends, Princess and Fairy. They are paw-deep in pre-noel preparations when they suddenly receive notification from the Keepers of Christmas that they are in charge of decorating the tree this year. They hop to the challenge in search of the various baubles, treasures, and delights described on their list. And let me tell you, locating these objects so cleverly secreted within Pignataro’s sweeter than sweet illustrations is no sloppy challenge. I’m sure pre-schoolers will have more success than I did and be thoroughly rewarded in glitter and good cheer for their efforts. Crafty, clever, and cute beyond measure, it’ll keep them busy for hours. It did me.

Stick around for Suggestion # 4 where I will introduce you to some hot off the press gift ideas, soon.

Check out the Kids’ Reading Guide 2015 – Picture Book lists here, in the meanwhile.