Do you bite off more than you can chew? One’s tendency for this disparity amplifies at Christmas time, at least, mine does. However, it’s not just at the festive table that choice and over-indulgence can be paralysing. The lead-up to my favourite time of the year is where many choke. The solution? Planning. Break needs, wants, and to-dos down into meaningful, chewable mouthfuls, starting with my Stocking Stuffer Suggestion List. Over the next month or so, I’ll continue to add some Kids’ literary suggestions that you can fill your lists with and have plenty of time to organise before Christmas.

Flashbacks are curious things. I didn’t feel confident enough to risk the Nutbush but the rush of the wind through my hair as I slid effortlessly albeit awarkedly across a wooden floor so highly polished you’d sworn it was wet, was nothing short of confidence boosting. I am doing this! I am 14 again. I am burning up the roller-skating rink! Turns out, roller-skating is a lot like riding a bike; you don’t really lose the knack as you age, just a bit of grace.

For flashbacks of a more literary sensation, there is plenty to choose from. The offerings are endless and provide buckets of visual and audial stimuli to keep you and your little ones grooving away for hours. Here are some favourites: 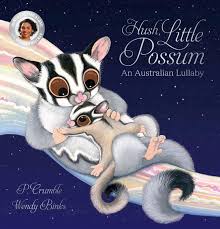 Hush Little Possum is a gorgeous adaptation of the classic lullaby, Hush Little Baby. Mama sugar glider and her baby are caught in a sudden outback storm, but brave Mama does everything she can to keep her babe warm and dry. Divine illustrations by WA artist Wendy Binks introduce readers to a myriad of Australian flora and fauna while Deborah Mailman sings along in the accompanying CD. Quite special for three to five year-olds. Remember Peter Combe? I do. His advice is to, ‘stay in touch with your inner child.’ Well you can with this CD release picture book featuring his favourites in, Juicy Juicy Green Grass and other fun songs. Blindingly bright, bold and bonkers enough to be loved by the very young and old. I like the Silly Postman best, I just do. You may have spent many long energetic hours swinging, stamping, and shaking your Hokey Pokey in playgroup and kinder sessions – I know I have, but never like this. Join an Australian cast with Sarah Hardy and Colin Buchanan (on CD) as they jump and shake their uniquely Aussie ways through this beloved children’s song (there’s tongue poking and ear flopping aplenty!) High energy and playful cues to get everyone involved and learning. Love this one. Following a string of popular tune-based picture books, the hilarious Topp Twins, and Jenny Cooper team up again for The Farmer in the Dell. Read, sing, play, live it. These renditions breathe exhilarating new life into beloved old gems. Cooper’s detailed and goofy illustrations capture the verve of each of these classic tunes based on accumulative and comic repetition. Others include, There’s a Hole in my Bucket, Do Your Ears Hang Low and She’ll be Coming Round the Mountain. Oooh, I feel another flashback coming on. High Ho! Kiwi singer, songwriter, Craig Smith creates laugh out loud songs that translate superbly into fun and funky picture books. Square Eyes is his latest, illustrated by Scott Tulloch. If you thought The Wonky Donkey was full of character and sass, wait until you meet Mr Square Eyes – a panda with a serious addiction to the old goggle box. An excellent, hi-energy comical attempt to discourage kids from doing less by convincing them to do something more. There are several entertaining remakes of the evergreen song, Ten Green Bottles featuring a billabong of interesting critters designed to get kids counting, moving, and grooving. Well move over silly wombats because here come the 10 Clumsy Emus. Emu fanatic, Wendy Binks illustrates this one with fabulous effect. Laden with astonishing detail, I struggled to find the hidden numbers in every scene, but maybe that’s because I was so hilariously distracted by the emusing (ha ha) antics and expressions of our esteemed friends. No CD needed with this one. Ten out of ten, no less. 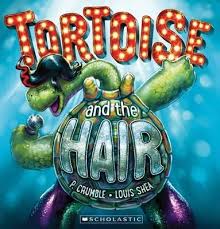 P. Crumble and Louis Shea are known for their perennial favourites in the, There was an Old Lady series. The Tortoise and the Hair is a jaw-splitting departure from these and although not based on a song or nursery rhythm but rather a classic fable, it conjured up all sorts of imagery and tenuous connections to the musical, Hair that I just had to include it. Saturated with satire, animal characters and hidden detail with a punchy little twist at the end, tortoise will have you rocking and rolling over and over again. 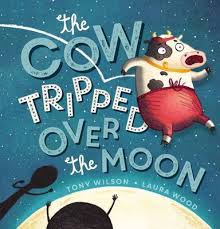 Lovers of classic nursery rhymes will adore Tony Wilson’s recently released, The Cow Tripped Over the Moon. Cow is beset with a high-flying ambition; to jump over the moon but she is plagued with difficulty. Repeated attempts end in disappointment and near failure until her friends remind her, it’s now or never; she will be remembered forever – if she can just get this right. A left of field reimagining coupled with the strong quirky imagery of Laura Wood, makes this a winner. Deborah Mailman makes a tantalising reappearance in Itsy Bitsy Teenie Weenie Yellow Polka-dot Bikini. If you think little ones might find that a mouthful, just watch them cha cha cha and sing along to this 1960’s classic by Paul Vance and Lee Pockriss. A beguiling cast of creatures is perfectly painted by acclaimed illustrator, Kerry Argent including one very brave polka-dot wearing hippo! Suitably capturing all the fun and warmth of a day at the beach. Without straying too far from the seaside, children’s author extraordinaire, Janeen Brian, takes us through a rhyming underwater odyssey to rival Homer’s adventure with Silly Squid! Poems about the Sea. Along the way, we meet giant squid, clever octopus, lumbering whales, delicate sea stars, adorable seals and so many more sublime sea-creatures, each showcased in sweet rhyming couplets and accompanied by fun facts. Informative, visually enchanting thanks to Cheryll Johns’ luscious full-page illustrations and utterly delightful. Definitely one to treasure.

One thought on “Stocking Stuffer Suggestion # 2”