Dumped by text message by her ‘perfect’ boyfriend, heartbroken Edie flees Sydney for the refuge of her childhood home, taking only a wilting bonsai as a reminder of her failure. But in this small coastal town, Edie has always lived in the shadow of her surf champion father. How can she move on from her ex — and from her past?

‘The inspiration for Edie’s story came from a few different places,’ Lisa says. ‘One of these was seeing the way that surfing was so much a part of life on the north coast, I wondered what it would be like to be an outsider – a girl who is scared of the water. While I am a surfer myself, my kids are fairly apathetic about it. In a town like Lennox Head, which has such a strong surfing culture, whether you surf becomes an important part of who you are.’ ‘The other inspiration is that feeling of living in a small town. Darling Head, where the novel is set, is a town of five thousand people. In a town like that, it is impossible to be anonymous. Edie has spent her whole life feeling like the odd one out. I wanted to see what would happen if she just let it all hang out.’  LISA WALKER

This appealing romance with a big dash of humour, a beautiful setting and a cast of memorable characters heralds the arrival of a major new Australian writer of popular women’s fiction. 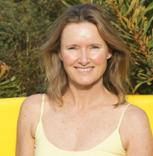 Lisa lives on the NSW North Coast with her husband and two teenage sons where she surfs, writes and works as a community relations manager for National Parks and Wildlife. She has held a myriad of different jobs including once being employed as an illustrator of crab larvae! She has a degree in zoology, a master’s in natural resource management and a graduate diploma in outdoor education. Lisa is an award winning short story writer; her play Baddest Backpackers aired on ABC RN in 2008 and her first novel Liar Bird was published in 2012. Sex, Lies &Bonsai is her second novel.   www.lisawalker.com.au