Rachel Le Rossignol, aka Rachel Nightingale, is the debut novelist of young adult fantasy fiction series, Tales of Tarya, including the first two in the trilogy – Harlequin’s Riddle and Columbine’s Tale. She also happens to be an award-winning playwright, with a musical she wrote set for the stage next year. Rachel has a background in theatre as well, which, when you bring all these creative elements together, you have the perfect blend for a magical series underpinning the gifts of artistry and storytelling and their boundless possibilities. The Tarya Trilogy is about the power of creativity and where it can take you, exploring the states of being within two different realms of another time. Rachel states, ‘it was inspired by a quote by Broadway actor Alan Cumming about that in-between place you discover just before you step onstage and enter a different world – a place where anything is possible…’ 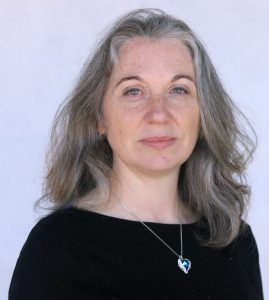 Rachel is here to discuss her writing journey and the culmination of her passions for the arts and storytelling in her books. Thanks Rachel!

Little eight-year-old Rachel decided for me. Sometimes I want to go back in time and talk her out of it and other times I want to pick her up, swing her round and go ‘wheeeee!’. It’s a fun job but it has its tough moments. Of course, it took many years, lots of writing, two creative writing degrees and a lot of persistence to actually get to the point of being published.

Please tell us a bit about your fascinating background in performance, and how you feel this helps with your storytelling abilities. I did my first theatre show when I was 17. I was in the chorus of Cinderella, and I was hooked. Over the years I’ve done just about everything possible, from acting to lighting, sound, direction and stage management. It all feeds into being about to create the atmosphere and reality of theatre in my books. Working for a number of years on the improvised ‘Murder on the Puffing Billy Express’ show was really important for bringing the players to life on the page, because the Commedia dell’Arte, the travelling players I’m writing about, do improvised shows. Understanding how improv works, and what it feels like to perform something and make it up on the spot, was really important. Plus improv stretches the creativity muscles, which is really helpful.

What kinds of books do you naturally draw inspiration from? Has your series been influenced by any of these titles or their authors?

I love all sorts of books, but if I’m particularly looking for inspiration I go back to Ray Bradbury’s short stories. He is a master of language, he understands the human condition so well, and the ideas in his stories are fascinating. I dream of being able to write like him. I think the book out there that is most like mine is The Night Circus, by Erin Morgenstern, since it’s about performers and magic, with a dash of romance, but Harlequin’s Riddle was written a long time before it was published so it wasn’t a source of inspiration.

Columbine’s Tale follows the gripping first title, Harlequin’s Riddle. What was your process in developing each title and subsequent series? Did you have your plots consciously mapped out beforehand? The books have changed so much from my original conception, but I think by the time I’d finished Harlequin’s Riddle I was pretty clear on the overall story. After that it was just fine-tuning the details. Aside from Mina’s quest to find her brother, there’s a very strong element of mystery related to the travelling players that Mina has to solve, and to do that properly I needed to be able to put some things in the first book that would only make sense in the third book. So plotting rather than pantsing (flying by the seat of my pants) was definitely the way to go. It means readers can look for clues early on, which is something I always love in a book.

What does the artisan life, costumes and drama mean to you personally?

I would love nothing more than to have a gypsy caravan and travel around, visiting many different places and offering up my stories. I used to pretend I was a gypsy when I was a teenager to make the walk home from school more interesting. I’d picture what I was wearing, and how I would cook over an open fire when I got home. I wish I could spend all my time creating, not doing the shopping or the other mundane tasks of life.

What has your publishing experience with Odyssey Books been like for you? How have they supported you throughout the process?

It’s been a sharp learning curve – being a writer and being an author are two different things. The main difference is learning about marketing and social media. But Odyssey have been great – there are company manuals that are super-helpful for knowing how to approach that side of things. And my publisher has a brilliant strategy, which is that she puts new authors in touch with the Odyssey author community, so you suddenly have an amazingly supportive network who can help you negotiate the whole ‘being published’ thing.

I’m pretty excited at the moment that a musical I wrote is going to be debuted in Auckland next year. It’s a re-telling of Aristophane’s classical Greek play, The Birds but with funky Spanish rhythms and a lot of comedy. Bach Musica are going to stage a concert version, with a full orchestra, soloists and forty-person choir. I will be travelling over to New Zealand to see it. I can’t wait, but I’m terrified at the same time – such a public performance of my work!

Thank you so much for your time, Rachel! It’s been a pleasure getting to know more about you and your books.

Rachel and the Tarya Tales can be found at her website, and her book blog tour is taking place here.