Okay, so the countdown is on: Chrissy pudding curing away; Christmas turkey ordered; extra chairs stacked ready for those visiting hoards. Santa’s list might even already be on its way to the North Pole but you realise you have a few more stockings to stuff. Here are a bunch of playful festive reads that may be a little low on literary beef but will deck your halls with seasonal joy and verve. They are guaranteed to keep anyone up to six years-old thoroughly amused for at least as long as it takes to roast your Christmas turkey. And the best part? You can sing-a-long to just about every one of them! Except this one,…One Night by Penny Matthews and Stephen Michael King is perhaps the least frivolous of the bunch being a heart-warming retelling about the legend of talking animals who magically relive the night Jesus was born every Christmas Eve at midnight. The conversational narrative paired with Stephen Michael King’s divine watercolour illustrations is so dreamlike, you’ll want to wish upon a star and listen out for the animals at midnight too. 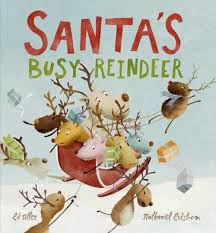 Forget about ten green bottles – Santa’s Busy Reindeer means red, as in Rudolph’s nose, is the new green. Ed Allen teams up with Sydney illustrator, Nathaniel Eckstrom as ten of Santa’s reindeer scramble madly to get a sleigh load of pressies delivered on time. Trouble is, they are too easily distracted for their own good. A jolly read-aloud counting book that embraces the sillier bits of the silly season.

Keep an eye on your Christmas tree and everything under it because that bloke’s back and his Christmas appetite is bigger than a five year-old’s wish list to Santa. There was an Old Bloke Who Swallowed a Present is bigger, brighter and even more ludicrous than previous Old Bloke and Old Lady books by P. Crumble and Louis Shea. Brimming with batty brilliance, this is visual gravy for your festive fare. It left me wondering though, how much that Old Bloke looks like someone I know. Possibly one of the best titles I’ve read in this series. 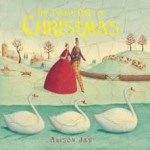 Take it down a gear or two with The Twelve Days of Christmas. Alison Jay’s distinctive fine art work gives this well-known song an almost vintage feel. The sumptuous illustrations are visually stimulating yet instil a genteel tranquillity in contrast to the frenetic rising tempo of the song, suggesting that you can have too much of a good thing. Merry makers be warned! 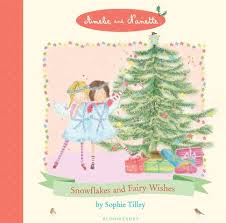 For little girls who want a bit more of a bedtime story to fall into dreams with, try Amelie and Nanette: Snowflakes and Fairy Wishes by Sophie Tilley. It’s all things soft and sugary just like the tops of the girls’ fairy cakes and just as sickly sweet in parts but then Christmas is the time to allow a bit of self-indulgence. Shimmering tinsel stars, enduring friendships and fairy wings are de rigueur for these two this Christmas.

Need something for the mini male monster masters in your life then whack Yikes, Santa Claws! by Pamela Butchart and Sam Lloyd on your list. It has dinosaurs, Santa, the word ‘poo’ in it and a nice lilting rhythm. Winner! Let your slightly older readers snuggle up with these early reader chapter books as you digest the last of the fruit mince pies. Fans and followers of Ella and Olivia will be in raptures with their Christmas instalment of Christmas Wonderland, while EJ 10 recruits can join Emma Jacks as she discovers why Christmas can be full of surprises in Hide and Peek. 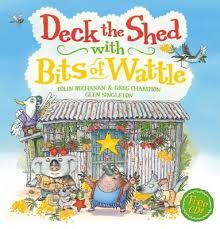 Glen Singleton’s illustrations just scream Australiana for me, which may explain why I tried to scream this picture book aloud to my family with such unbridled enthusiasm. Perhaps I should have relied more on the bonus CD thoughtfully included. Happy to report my rendition of this popular Chrissy carol did nothing to diminish their enjoyment of Colin Buchanan’s (along with Greg Champion) and Glen Singleton’s Deck the Shed with Bits of Wattle.

Syd Echidna is in the throes of sprucing up his shed for Christmas when a wretched willy-willy ‘undecorates’ all his hard work. Exasperated beyond exhaustion, Syd slips into a deep sleep while a troop of his best mates set to work on a bonza Christmas surprise for him.

Leg thumping, sing-along jocularity that will be getting lots of airplay around these parts this season. Because who doesn’t love a bit of song and dance at Christmas time? Make sure your kids are part of the fun.

These aren’t even the tip of the iceberg, more a small bump somewhere near the top a North Pole-sized mountain of cool Chrissy reads available this season. Be sure to look around our other posts for more great kids’ titles.

If you’re looking for gifts with less focus on Christmas flavour but equal heart and soul, keep an eye out for my next post: Dim’s Top 25 Cracking Christmas Reads for Kids.