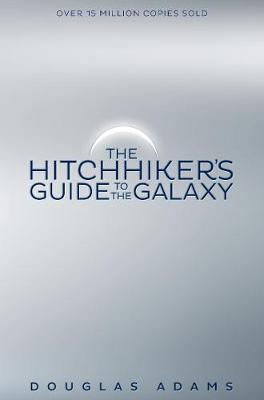 The Hitch Hikers sci-fi comedy franchise (for want of a better word) by Douglas Adams is instantly recognisable and much loved. Beginning as a radio series in 1978, it has gone on to become books, further radios series, a television series and a film. My relationship with it is somewhat patchy.

“The ships hung in the sky in much the same way that bricks don’t.”

As a kid, I only ever caught a couple of the radio eps. I liked them. They were weird and different. When the television series came out in 1981, I watched and loved it. I then read the first couple of books. I remember loving the first but being a little disappointed with the second… and never getting around to the rest. I certainly didn’t care for the 2005 film.

I had always meant to catch up with the rest of the books. So I recently decided to reread the first two and then, at long last, read the rest.

The Hitch Hiker’s Guide to the Galaxy was published in 1979. It holds up so very well. Truly deserving of the title modern classic. The humour is spot on, the plot is great and the quirky cast of characters are a joy. I really do think it is the perfect blend of comedy and science fiction. There are so many bonkers, out-there concepts… from the translating Babel Fish to the Infinite Improbability Drive used to power the Heart of Gold spaceship. And Adams’s commentary on the human condition, religion, politics, everything, is also pretty spot on.

“And then, one Thursday, nearly two thousand years after one man had been nailed to a tree for saying how great it would be to be nice to people for a change, one girl sitting on her own in a small café in Rickmansworth suddenly realised what it was that had been going wrong all this time, and she finally knew how the world could be made a good and happy place. This time it was right, it would work, and no one would have to get nailed to anything.”

The Restaurant at the End of the Universe was published in 1980. Although I enjoyed it, I found it far inferior to the first book. The humour felt less inventive and a little bit tired. The plot and characters still managed to carry me through, but with less of the page-turning intensity of the first.

Life, the Universe and Everything was published in 1982. This is… well… there’s no nice way to say it. It’s a steaming pile of crap! The plot is confused and almost unfollowable. The humour is forced… so badly forced. It was a real slog making it through this book… so much so, that I couldn’t bring myself to read any more in the series.

But if you do want to read the others, they are…

There is another book, And Another Thing… (2009), but it was written by Eoin Colfer, of Artemis Fowl fame.

I own the first four books in an omnibus edition, The Hitch Hiker’s Guide of the Galaxy: A Trilogy in Four Parts, which was published 1986. Even though I’m unlikely to ever read that fourth instalment, I will treasure this lovely hardcover edition. When Adams toured Australia to promote his book, Last Chance to See, back in the late 80s, I heard him speak at a literary lunch and was lucky enough to get him to autograph my copy.