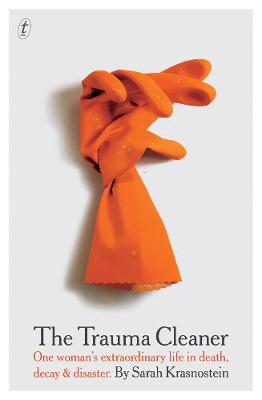 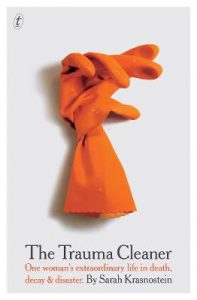 The Christmas–New Year break contains but two priorities for me: to rest and to read books.

Strangely, given its slightly heavier subject matter, Sarah Krasnostein’s The Trauma Cleaner: One woman’s extraordinary life in death, decay & disaster was one of the books I was most keen to read at this time.

In truth, I was attracted by both the concept and the cover art. The former is that the book is the biography of Sandra, whose work concentrates on cleaning premises that range from sites of hoarding to crime scenes. The latter is the simple but sharp contrast between a white background and slightly wrung bright orange plastic glove. On a semi-gloss cover that could, arguably, be wiped down with a wet cloth if needed.

While trauma cleaning is in and of itself a macabrely fascinating concept (Krasnostein quickly explains that it is a little-known but necessary business for crime scenes and the like—police and other emergency services aren’t there to clean up), Sandra’s story is even more so. Before she was a trauma cleaner, Sandra was, as the blurb explains, ‘a husband and father, drag queen, sex reassignment patient, sex worker, businesswoman, trophy wife …’

So yeah, there’s a lot to this tale.

The book’s first lines are actually the lines on Sandra’s business card, stating that ‘excellence is no accident’ before listing the types of services she offers. These include hoarding, methamphetamine lab, and death-scene clean-up, as well as odour control.

All the endlessly fascinating things that happen in the shadows and that provide insights into humanity. If this book shows us anything, it’s that these situations are but the extreme manifestations of the issues of loneliness, depression, anxiety, and more that we all grapple with at one time or another. Sandra included.

Adopted and then abused by her adoptive parents and trying to come to terms with being transgender at a time when it was even less accepted than it is now (if it even is now), what Sandra has gone through is soul-searchingly sad.

Seriously, the book’s opening chapters made me wonder how she survived much less triumphed over her childhood, and I can only imagine how confusing and difficult and stressful it would have been facing a lack of acceptance as well as medical scrutiny when trying to undergo gender reassignment surgery. Not to mention the fact that Sandra underwent all of this around the time of HIV’s arrival. It’s also heart-swellingly impressive just how much she’s managed to make of her life, rebuilding it time and again.

Krasnostein notes that Sandra is immaculately dressed at all times. And that she’s also accompanied by an oxygen tank to help her manage a respiratory condition that is exacerbated by the kinds of dusty, fume- and mould-laden environments in which she works. Trauma cleaning is brutally physical work: ‘See, people think “cleaning” and that you need a bucket of water and a cloth … We need crowbars, spades, rakes, a sledgehammer …’ Sandra explains.

At 260 pages, this book is of average length, but is so accessible and I read it so quickly that those 260 pages felt short. I still have questions. For instance, Krasnostein writes that she first encountered Sandra at a forensic support services conference. I wondered immediately what prompted Krasnostein to attend one. And I wanted to know more detail about Sandra in general—she so utterly fascinated me.

But I’m similarly conscious that there were many rabbit warrens Krasnostein could have gone down. Each life within Sandra’s life just about warrants a book of its own, so it would have been an unimaginably herculean task for Krasnostein to contain the tales to one book. Which she did well, giving mostly equal airtime to key times in Sandra’s life: her childhood, moving out of home and marrying, grappling with her gender and sexuality, careers she’s had, violence she’s endured, loves she’s lost, and how she’s had to repeatedly rebuild her life and finances multiple times.

My only criticisms of the book are that there is too much of the author in it and the text suffers a little from overwriting and thesaurus syndrome. While I’m sure Krasnostein felt a strong personal connection to Sandra’s story, Sandra’s story alone was so rich and compelling that it really needed to stand alone. Likewise, there were times when it felt like prose was over-explained. The story itself was so strong it could have been told matter-of-factly. Likewise, Sandra’s memory loss and subsequent unreliable narration were referenced too often. They just needed to be mentioned once at the beginning and left at that.

But these are small quibbles about what is ultimately an ambitious and refreshingly different book. Sandra’s is a little-told story that warrants greater attention and respect. I hope to read some follow-up articles or books about her—I get the sense she has many more incredible lives to lead and many more stories to share.