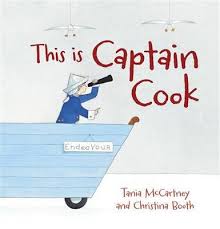 History can be a hard pill to swallow. It’s easy to choke on a diet of dried up, dusty old facts about dried up, dusty old people. Trouble is, what those folk did in our not so distant pasts was often fascinating and ground-breaking and well worth exploring. So how do you find the right sweetener to tempt young people to try a nibble of the past? You dish it up as a school play, garnish it with luscious imagery, and call it a picture book, of course!

This is Captain Cook by Tania McCartney and Christina Booth, is exactly how I like my history served up and, as it turns out, how my Miss 9 likes it too. The fact that she was able to recognise that these adventurous events occurred, ‘way before you were born Mummy’ at the time when the First Fleet began arriving, indicated that this fact-based picture book struck accord with her and her current class room learning. 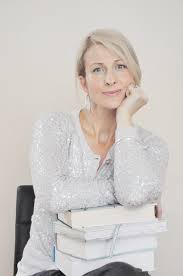 McCartney skilfully navigates the reader through a carefully considered chronology of James Cook’s life. Miss 9 was keen to point out that the opening act is clear and clever, introducing us to Cook’s beginnings and the start of the school play in which his life is being portrayed. 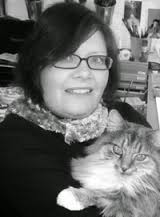 Rather like a one-take shoot on a film set, This is Captain Cook retains the same illustrative perspective throughout the book. The reader has (second) row seats in the audience and is thus privy to not only the terrific parallel visual narrative of the audience members, but of every action that takes place on stage too. You may think this would have the potential to dissolve into dreariness but it definitely does not thanks to McCartney’s spirited narrative and Booth’s charming drawings. 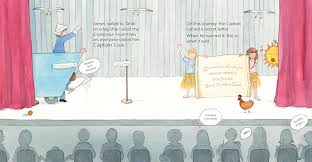 If Miss 9 had more thumbs, she would hoist them as high as a top sail because she enjoyed the lively comedy used to gently reveal Cook’s personality (as it may have been) and his penchant for shiny buttons rather than just focusing on his noteworthy exploits and achievements. She found the latter much easier to ingest because of the humanisation of his story. Sitting through another telling of the ‘show’ was not problem either although she is quick to add that perhaps a life at sea would not be for her as it seems Cook was never ever able to have a pet dog; at least not in this particular production! An ubiquitous chook and comical cast of other avian members however, make a delightful reoccurring appearance throughout the performance, earning a standing ovation from me too. 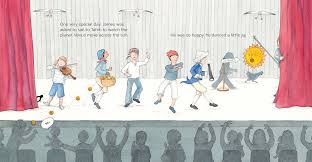 There is a raft of exquisite subtle details in this tale about one of the most accomplished mariners and adventurers of our time all served up with just the right amount of frivolity and wit guaranteed to keep youngsters 3 – 8 years old and beyond tucking in. And, just like eating a bowl of vegies in the guise of Spaghetti Bolognese, they will hardly even realise that it’s good for them.

Before you get to the utterly endearing end pages (Bok Bok!), walk through Cook’s Gallery to view some of the real pictures and maps sections of this story are based around. You are invited to discover more through links by the National Library of Australia who announces that this picture book is not so much about ‘the questionable outcomes of exploration and settlement for indigenous peoples’ rather a focus on ‘the life of Captain James Cook as a mariner, father and adventurer.’

With the help of one cheeky chook, and McCartney and Booth, I think this objective has been admirably achieved. Somebody give these chooks a bouquet of flowers. Brava!

This review was kindly supplemented by Miss 9 Powell, who surprisingly now likes history.