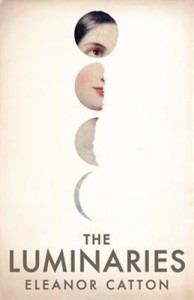 Review – The Luminaries by Eleanor Catton

This was such a joy to read. It is pure reading heaven. It is richly detailed yet highly readable and features a large cast of characters who are each flawed in all the many ways people can be. It is also an intricate mystery, a puzzle that each character (and you the reader) are trying to get to the bottom of.

The Luminaries is a monster of a book. The size of the book may put you off but don’t be! I stupidly let this sit on my shelf for months. I didn’t want to commit to a book so big. However, literally after the first page, I was so glad that this was a huge book because I just wanted to read and read. You honestly don’t want this book to end. When I did finish I instantly began to miss it and all it’s characters.

Eleanor Catton loses you in the story and, like the characters of the novel, sucks you in to the puzzle. Catton’s style and talent defy her years. Each chapter begins with a brilliantly penned synopsis, which I must admit I’d read at the end of the previous chapter like a ‘next time on The Luminaries‘. These synopses brilliant capture the mood and tone of the story and are just one of many hooks.

The story is set in the New Zealand Goldfields and involves a murder, an attempted suicide, a missing man and a pile of gold whose ownership is far from clear. The mystery unfolds from the perspective of 13 men who are each involved in the story in different ways. Each of these men piece together their stories but the truth is hiding behind miscommunication, misinterpretation and each person’s own intentions and stake in the events.

The Luminaries is totally absorbing, utterly original and a must for The Booker Prize! I am going to have an absolute nightmare putting together my top 10 of the year now (a good nightmare). Eleanor Catton is such an amazing writer (I already have The Rehearsal sitting in my ‘to read’ pile). Even without The Booker this is a book that deserves to be read, enjoyed, celebrated and read again.