Human beings can be a tenacious breed. Our stubborn ability to cling to optimism often overrides unsolicited fear, which I guess allows us to fit in with the rest of the world’s species and, in short, survive. Brian Falkner artfully cultivates that seed of hope in a choice collection of short stories ideal for mid-grade to YA readers and beyond.

That Stubborn Seed of Hope Stories heralds what I hope is the first of more anthologies for children, depicting concise, gripping stories linked in theme and flavour. The tone of this collection is at times dark and sobering, sorrowful and desperate yet somehow also manages to leave the reader with a yearning to read on, to venture further into their own swamp of fears and to face those disquietudes with the help of another’s story.

Falkner addresses a number of fearful situations and occasions to dread with these stories: the fear of death, embarrassment, rejection, heartbreak to name a few. At times the obvious theme is enshrouded by a veil of less certain anxieties which combine to form complex and rich narratives. 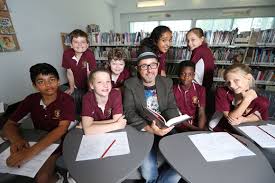 Each story’s characters immediately imbue themselves with the reader; it’s easy to feel the pain and apprehension of others when we recognise the root of their fear in ourselves. Even if they have never suffered the effects of a life-threatening virus or debilitating condition like Alzheimer’s, young readers will recognise the scent of despair and tragedy as assuredly as the odour of a rotting animal and curiously, as some creatures are wont to do, be attracted to it.

Falkner is supreme at creating suspension of belief. Each of these bite-sized tales feeds the reader just enough mental unrest, prompting them to want bigger mouthfuls. Sometimes he satiates us, other times, we are left hungering for more. It’s delightfully wicked and curiously satisfying.

These stories – a teenage girl discovers her boyfriend has a life-threatening virus the day after they share their first kiss – a seventeen-year-old awakes to find himself trapped in an elderly body for example – drill away at the veneer separating hope from fear yet still manage to instil a sense of promise.

My favourites, Strawberry Lou and Santa’s Little Helper perhaps underscore this enduring theme of hope overriding fear as described so eloquently by many like Jane Austen as ‘combining sober acceptance of reality with the attempt always to hope for the best.’

Coincidentally, nearly every one of these stories evoked flickers of recognition with other incidents that have occurred in my life, real or otherwise experienced in some other format. It’s precisely this universal intimacy of fear that allows this short story collection to resonate so personally and strongly with readers.

That Stubborn Seed of Hope Stories collection is instantly absorbing, deliciously disarming, and emotionally rocking. It is one anthology you’ll wish will never end…which is just as well given the premise of the final story which infers you’ll die when you finish reading this book. But then without the effort to master fear, we lack the momentum to move forward, no. So…read on…