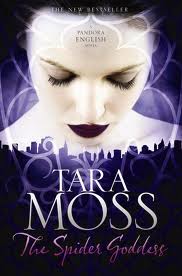 There’s a new designer in town- and she has Pandora in her sights. Who knew the fashion industry could be so venomous.

It’s now been two months since Pandora first moved to the mysterious Spektor to live with her equally mysterious Great-Aunt Celia. And it’s certainly been anything but boring. She’s encountered counting-obsessed vamps, ghosts, zombies and a myriad of characters she never thought possible.

Now there’s a new threat to New York, and Pandora seems to be a beacon for the strange and unexplained.

I had mixed feelings about the first in the Pandora English series but my final feeling was that I was looking forward to seeing the next in the series.  Unfortunately the old brain box was working rather sluggishly for a while there after the brain surgery and only now am I getting to writing up my review of this second Pandora English novel. Sorry about that.

I suspect one of the reasons, probably the major reason, why I had those mixed feelings about The Blood Countess was that I was not expecting this from Tara Moss, being used to and a fan of her crime novels.

With The Spider Goddess, I was much happier. I felt some of the problems I had with its predecessor had been addressed (not that I am arrogant enough to suggest I am the reason why they were addressed!) and along the way, these added to the greater development of the larger plotline. For example, cartoonist Charles Addams gets a mention in such a way that I half-expect him to play some sort of role in a future novel.

There is definitely a creepy feel to the story but not to the point that I would be uncomfortable with younger readers getting their hands on the story. I have given a copy to a young friend, fully expecting this young adult to also enjoy it.

I felt Pandora was a stronger character this time, adding to the story. I also liked Moss’s exploration and use of various mythologies. But it is a paranormal story, after all. I even found myself feeling a little sorry for Pandora and her feelings for the deceased Lieutenant Luke – bit hard to see a relationship developing with a ghost who only seems to be able to appear in certain places.

I enjoyed this novel and read it quite quickly.

This blogger has not provided a profile. View all posts by Ross Hamilton