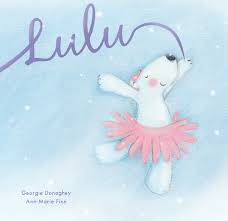 At first glance, life on the icy floes may seem appealing. (Unless you reside in SE Queensland as I do with no real concept of what cold is until you have to live through ‘an unseasonably cold winter’ with little more than a cotton tee-shirt and a pair of bed socks). In Lulu’s world, there is more ice than you can shake an Eskimo at and ‘mountains of fish’ to sate the largest appetite. What more could a young polar bear desire? Yet like many of us closeted in the everyday cosiness of the familiar, Lulu harbours dreams and a hankering to fulfil them.

Lulu’s name ribbons across the sweetly simple cover of Georgie Donaghey’s debut picture book, Lulu. Along with illustrator, Ann-Marie Finn, Donaghey has created a tale that will strike at least two chords with many young readers aged three and above: the need to chase one’s desires no matter how ambitious and dancing.

Expounding these themes, Donaghey uses carefully nurtured verse to draw the reader along with Lulu who sets off alone in pursuit of her dream of performing on the big stage. It’s not really a case of running away, rather running to somewhere. Pirouetting on the snow for her Arctic friends just doesn’t cut it for her anymore and in true grass-is-greener style, or in this case, the lights-are-brighter-than-the-aurora-borealis style, Lulu eventually conquers her ambitions, finds her place on stage and performs for many seasons in the big city.

It’s a life filled with glamour and fame, highbrow audiences and gratifying reviews but sadly not with true friends. Turns out, the ice is greener after all and eventually the call of home lures Lulu back.

Donaghey does well to point out to young readers that it’s okay to have dreams and great aspirations. We don’t always attain our goals, but sometimes, if we want them hard enough, dreams do come true. Lulu was lucky enough to experience the realisation of her strongest desires but also to realise that her most steadfast believers, her friends would always be there waiting for her no matter how far away her dreams took her. This conveys a positive message of security for children, stressing the importance of being self-assured.

Finns’ considered colour choices for the illustrations are uncomplicated revealing mood, time and place with minimal clutter. White space replicates the vast pristine landscape of Lulu’s home with subtle colour shifts and blends from polar blues and whites to snowflake- pretty sunset yellows used to maximum effect on what could have been a monochromatic environment to illustrate. Little blips of pink provide contrast and encourage little eyes to focus on Lulu, the true star of the show. 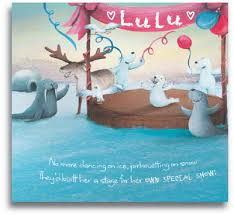 With its soft matt cover (in this paperback edition), comfortable rhythm, and pleasing artwork it is hard not to be warmed by this story set on the ice. 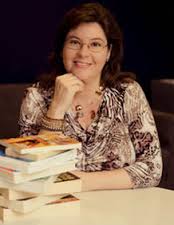 Pop over to Romi’s interview with Lulu author, Georgie Donaghey now for more interesting insight into the creation of this plucky little polar bear and the fiercely determined creator behind her.

One thought on “Review – Lulu”