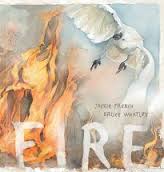 My first glimpse of the flamed-licked cover of Fire, sparked a considerable amount of emotion. Growing up close to the Adelaide foothills meant scorching childhood summers were unfortunately often synonymous with phrases such as Ash Wednesday and Black Friday.

A couple of years ago I was inextricably moved by the heart-rending picture book recount of the Brisbane floods by the same quietly sensational picture book team, Jackie French and Bruce Whatley, (Flood) so viewed this new picture book release of theirs with anxious anticipation. Could they pull off another disaster-inspired winner able to resound with children and adults alike? The answer is, yes.

The cover and title pages, both featuring the single word, Fire, as though smeared by someone’s finger across a grimy, ash-streaked window pane, mesmerised me from the onset. I was unable to quell my attraction in the same way one is unable to sever ones hypnotic trance with fire’s dancing flames.

This is apt, for fire is the predominate character in this masterful expression of how our nation weathers one of its most deadly natural adversaries. Its release is timely. Once again, vast tracks of Australia bake till hills are ‘bleached golden…and leaves lay limp in the air sucked dry.’ All sobering reminders of Victoria five years past. French balances beautiful evocative language with harsh stark imagery. She tempers the brittle narrative reality with soft lilting rhyme, thus allowing us to ‘enjoy’ the awful spectacle unfolding before us. A sulphur crested cockatoo sits alone under ‘a baked blue sky.’ He is disturbed by a flickering, snickering enemy. The birth of a bush fire takes hold with alarming ferocity and speed.

Fear feeds confusion, people flee. The fire feeds itself, growing more and more invincible and mocking as it consumes everything in its path without mercy or remorse. Soon an inferno rages; a fire storm spitting fury and blasting away life, deforming reality and changing lives forever.

But there is hope, always hope, on the horizon: a speck overhead, a hose, a loved-ones hand…And in spite of the devastation, French shows us that it is how we face the aftermath that is often the true measure of our survival.

I am unable to say whether the narrative imagery out surpasses the illustrations or vice versa, however Bruce Whatley’s visual images burnt themselves deep into my psyche like the very stink of fire ravaged bushland. They are breathtaking.

Most fascinating are Whatley’s endnotes describing how difficult it was for him to capture ‘fire’ in paint. And yet all of its dirty, erratic intensity and heat are rendered with such brilliant acuity, that the pages look almost too hot to touch. Logs turned to charcoal glow amber so realistically, you swear you could toast marshmallows on them.

But this is no marshmallow-toasting-time as we are reminded by images of burnt out cars, stricken families and most poignantly, a volunteer fire fighter giving a koala a sip of water from his bottle; all vivid recollections of news clips from former dire times.

Every page is hemmed in by ruled pencilled borderlines. The water coloured illustrations fill these windows, sometimes bleeding over the edges which for me, softens the impact of the scene, contains it somehow and therefore prepares me to turn the next page. I presume many younger readers will experience this subconsciously as well. My 8 year old appreciated the cockatoo’s presence throughout as much as I valued the lingering message that out of tragedy and despair, ‘good things will grow again’.

Fire is a warming testimony to the selflessness of those who give everything to fight Australia’s bushfires. It is as powerful and dramatic as fire itself but is a picture book that will have significant relevance for readers 4 + for varying reasons. It embraces the sometimes bleak reality of living in Australia and how that translates to our ‘never say never’ attitude and our indomitable spirit of survival.

Another CBCA award book in the making. Get your copy here.