I had no idea what to expect with The Female of the Species by Mindy McGinnis…but it was absolutely amazing. Although I’m a teeny tiny bit ruined afterwards. But that’s totally okay because everyone likes to finish a book and feel like their feels just got wrung and battered. That aside…this book was all kinds of excellent! I adored the author’s previous book, Not a Drop To Drink, so I should’ve known this would carry similar awesome. 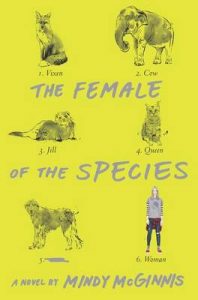 It’s one of the best contemporaries I’ve read in 2016! It effortlessly balances (A) complicated moral questions, (B) commentates on rape-culture and how disgusting the act of being apathetic towards it is, (C) it’s completely morally-grey, (D) there is stabbing, and (E) it has some of the most complex and amazing characters I’ve ever read. This book blew me away.

It’s narrated by 3 people — Alex, Jack, and Peekay. I’m not usually a fan of multiple narration, but this book pulled it off perfectly. All three protagonists were amazing, complex, and interesting.

“Define success,” I say almost to myself.
“I didn’t kill anyone today,” Alex says.

I’m immensely impressed with the secondary characters too! They were all dimensional and intriguing. I particularly liked Branely, the cliche “mean girl” who for all the world seemed shallow and fake…but she wasn’t. I’m just awed with how the author managed to remind us that everyone is a person with a story even if you don’t get to see the whole thing.

The romance is beautiful. Although it’ll also punch your feels, so you’ve been warned. But I don’t really think the book is focused on romance. It does talk a lot and very openly about sex. It just smacks down the “boys will be boys” mantra and it discusses alcohol addictions and rape culture. It’s very gritty and realistic.

All I want to do is say “please read this book”! It’s poignant, it’s beautifully written, the characters are amazing, the writing will melt you. It commentates on society’s warped standards and it’s realistic and brutal and bloody. And there’s puppies, which is the real deal clincher right there.