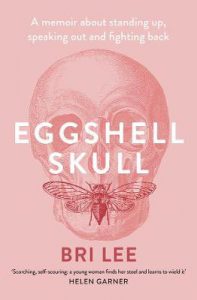 I should preface this post with a warning that it is about a book about sex crimes, which might be confronting for some readers.

But Eggshell Skull wouldn’t be effective if it wasn’t evoking discomfort.

Let me back up.

Eggshell Skull is the tale of a daughter of a cop, law graduate, and District Court judge’s associate Bri Lee (AKA she of Hot Chicks with Big Brains) who is, by way of the juxtaposition of these three elements, uniquely positioned to discuss the Australian justice system’s handling of sex crimes. She went from helping facilitate sex crime trials in her role as an associate to being a complainant navigating the system as she sought justice for sex crimes that were committed on her by her older brother’s friend when she was just in primary school.

Her own life and work experience should have prepared her adequately for what was to come. But that’s the point of the book: the system is so difficult, so imperfect, and so arguably segmented and broken that even with her background and a strong support network, making a complaint, then seeing it all the way through to its trial conclusion, was inordinately grim. ‘The more I learned of the huge, “blind” justice system,’ she writes, ‘the more I learned that it was just as human and fallible as everything and everyone that created and preceded it.’

Also, she notes: ‘Nobody tells you that if you want to press charges against the man who molested you, you still have to go to work, get jobs done, and interact with people as though you’re a normal human being … You’ll still drop the roast you just made, and miss your bus, and run out of toilet paper.’

There are so many parts of the book that both shocked and resonated with me (and, going by the number of people who have bought the book and flocked to panels Lee has been on, many others). These include the parts about the number of women who excuse themselves from sex crime trials because they themselves have been victims of sex crimes and cannot bring themselves to sit through (much less do so impartially) a trial about that very subject.

These also include the number of defence barristers who go out of their way to strike women from the jury—with eight free-pass ejections available to the defence, it’s highly possible to stack, or at least strongly influence, Australian juries. (Interestingly, as Lee has herself flagged in subsequent interviews and panels I’ve seen, the British legal system from which we adopted this practice no longer allows eight strikes because it’s widely recognised just how much it can skew outcomes.)

These include too that sex crimes are less often committed by paedophiles and more often by opportunists—who are frequently very ordinary, suburban men. A 2011 report found that most offending occurred in the home, without the use of a weapon or violence, and the offenders are known to the victim. This runs counter to the violent-attack-by-a-stranger narrative. Lee notes unsurprisingly, but sadly, sex crime trials that feature weapons and non-white defendants have higher conviction rates.

Meanwhile the female complainants seem to simultaneously need to show that they are both desirable enough to have been raped, but that they did not consent to it. As Lee outlines, the perfect complainant is a cute little girl who you can’t ask which contraception she is on or how short her skirt was or how many drinks she’d had. It’s not, as in one case that played out before her, a woman who had been drinking with the guy, who was on the pill, who was combative when questioned, and/or who was medicated for anxiety and depression.

‘The case felt like a David and Goliath battle,’ Lee writes. ‘”There’s no evidence apart from the complainants story,” they kept saying, but what evidence what evidence was she supposed to bring? So many of them were terrified, submitting to intercourse to avoid the punches or cuts that, ironically, would have helped them secure a conviction. So many took months or years to come forward—then, despite showing monumental strength in making a report, they were cross-examined about their “inexplicable” delay.’

The ‘eggshell skull’ legal principle that lends the book its title is, as Lee explains: ‘The premise is that if Person A were to have a skull as thin as an eggshell, and Person B struck them on the head, intending only to punch them, but in fact killed them, Person B is responsible for the damage they cause … a defendant must “take their victims as they find them”’. That is, you can’t absolve yourself of some responsibility because someone had a weakness or pre-existing condition. You are responsible for the full extent of their injuries.

Lee flips that premise, considering what it might involve if that person is educated, articulate, feminist, and prepared to stand up, speak out, and fight back. That, combined with the juxtaposition of Lee’s insight as a police officer’s daughter turned complainant forewarned and forearmed with a law degree and experience working in the courts but no longer interested in pursuing a career in law, is perhaps what is most powerful about Eggshell Skull. Lee sits both inside and outside the system enough to be able to articulate its problems and its potential solutions.

For example, Lee skewers arguments that you can’t shift the presumption of innocence for sex crime defendants. As she notes, we do in fact already have equivalents: If you car is found to have been speeding or drugs are found in your house, as the car and house owner you are presumed to be responsible and have to prove otherwise.

Which is a hint of what I suspect will be Eggshell Skull’s legacy. Apart from being a gripping read most people will cancel plans for and inhale in a few short sittings, the book’s legal and social justice issues will continue to resonate. More than a misery memoir, Eggshell Skull has real potential to help shift how we handle sex crimes from initial complaint to final trial outcome.

Side note: I learnt from this book that the mural I ride past on my daily work and uni commute is actually by the fantastic Japanese artist Yayoi Kusama. Apparently it’s entitled Eyes are Singing Out. At Law school, I’ve heard them reference it as the eyes looking up at the judiciary and warning them that they’re being watched and their behaviour must be exemplary. Which surprised me. I’ve always considered it a rather intimidating mural denoting that defendants are being watched and judged by a jury of peers. Who knows. Maybe it’s meant to mean both ¯\_(ツ)_/¯.